Christian Writer Tells Women How to “Learn Their Place”

More recently, BGR’s spokesman-for-God answers a burning question: How can you help the women in your life “learn their place“? 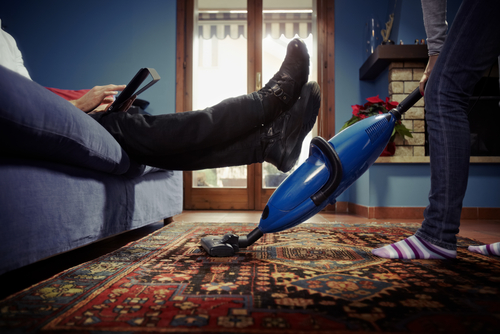 First, though, he explains the necessity of women playing their assigned roles. Women, you see, are often thinking for themselves. Valuing themselves. Even — brace yourself — doing things that the men in their lives don’t always approve of. And this is very bad.

We have women saying things in the wrong place or in the wrong way. Women showing no deference or respect toward men. Daughters showing little to no respect for their fathers and wives showing little to no respect for their husbands. Wives routinely shame their husbands in public not to mention in private. Daughters disobey their fathers and wives routinely disobey their husbands with impunity. Many women pursue selfish career ambitions instead of being ambitious for marriage, child bearing and homemaking.

Naturally, this cannot be. So if you, like the intrepid Servant-of-God at BGR, are tired of uppity women not obeying their masters (this is, literally, the word he uses when referring to husbands), he has a list of points, all supported by Bible verses, for use in indoctrinating the young woman in your life.

He starts off with policing a girl’s speech. The Godly Girl is not “loud or boisterous but instead she is quiet and meek.” After a few admonitions against gossip and encouragements to hold her tongue when appropriate, he gets to what a girl should aspire to in life:

She is ambitious to be a wife, mother and homemaker

Because, remember, a career is “selfish.” It’s not just her ambition that matters, though. Her sexuality and appearance are also very, very important.

She dresses appropriate to the occasion (modestly)

Luckily, none of these things are at odds with one another. It’s easy. A woman just has to be an experienced virgin, while simultaneously prioritizing modesty as she looks good for her husband.

A good woman also has to realize that she’s essentially a child, says BGR. A baby-making child, entirely dependent on and answerable to her male guardian.

She has a submissive spirit as opposed to a contentious spirit

She embraces patriarchy (male authority over women) in the home, the Church and in society

Now, keep in mind, one post earlier, BGR was talking about the threat men face of having to pay alimony and child support to their exes. Aside from the fact that taking advice from BGR is already a good first step on the path to divorce, think about that. The good Christian woman can’t pursue a career, because that’s selfish. She has to be dependent on men, from childhood onward. Anything else is to overturn God’s plan and disrespect her father and husband.

But if this same woman, whose only ambition and experience has been to raise children and maintain a household, expects financial support — even for her children — if the marriage goes south, that’s also terrible… for the man.

He’s not done yet. A woman is expected to be entirely dependent on (and subservient to) men.

She embraces the fact that God made her to be the helper to her husband, not him to be her helper

Many Christian misogynists attempt to explain their demeaning patriarchal views as a sort of divine separate-but-equal status between men and women. It inevitably leads to male dominance of women. BGR is every bit (and probably more) of a misogynist than those who pretend that controlling women isn’t because they believe men are superior, but he embraces his misogyny head on instead of hiding behind empty platitudes. Husbands and wives aren’t “separate but equal” in his view. Men are the masters, and women the “weaker vessel.”

It’s disgusting, but I suppose we should give him credit for not trying to be deceptive about it… in the same way that Donald Trump deserves credit for shouting what the Republican Party generally conveys in whispers and knowing nods.

He still wasn’t finished telling women what to do:

She does not nag her husband into doing what is right

She never makes her husband ashamed, but rather she brings him honor

It doesn’t really matter what failings her husband — I’m sorry, master — might have; a good wife reveres him anyway, never nagging or shaming his behaviors, whatever they might be. If she just keeps being nicer, they’ll correct themselves. (Naturally, since the man is master and spiritual guide, this reverence only goes one way — she must be open to correction, but must never correct!)

This is a worldview that empowers abusers, disregards the intellect and limits the potential of women, and destroys healthy relationships between women and men.

Fortunately, much of humanity has already left these toxic notions in the dustbin of history where they belong. As BGR seems keen to demonstrate, however, there are always misogynists longing for the good old days when women were kept in “their place.”

March 3, 2016 After Years of Relentless Violence, Bangladeshi High Court Considers Nixing Islam as State Religion
Browse Our Archives
What Are Your Thoughts?leave a comment