Are You an Atheist Who Plans to Vote for the Eventual Republican Nominee? I Want to Hear From You March 3, 2016 Hemant Mehta

Are You an Atheist Who Plans to Vote for the Eventual Republican Nominee? I Want to Hear From You

I’m going to say this knowing it’s anecdotal at best: If there’s any political debate going on among the atheists I know, it’s over whether it’s better to support Bernie Sanders or Hillary Clinton.

At least one survey has given the atheist/Agnostic edge to Sanders. That same survey didn’t even list a Republican preference for our demographic — I assume that’s because the sample size of atheists willing to support the current slate of GOP candidates was so small. 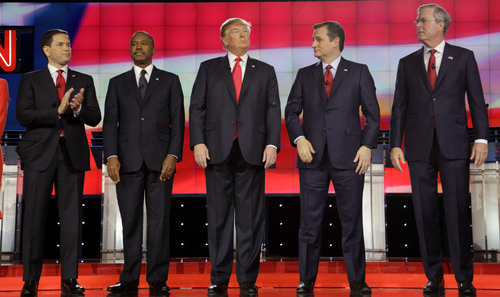 The point is: I don’t know any active atheists who are even considering voting for Ted Cruz or Marco Rubio. Those guys are religious conservatives whose values go against what most of us believe.

Michael Shermer, publisher of Skeptic magazine, was recently interviewed by KCRW, an NPR affiliate in California. To my surprise, he was introduced as a Trump supporter (around the 17:17 mark).

I couldn’t believe it. I thought skeptics were supposed to be able to see through bullshit.

Shermer’s reasoning boiled down to the idea that Trump was a good dealmaker:

… Things I like about Donald Trump? First of all, this idea of deal-making. And not providing, say, a 14-point plan on every single thing he’s gonna do. Well, as he points out, and this is true, like the boxer who has a plan for every round of the 12-round match, and then gets punched in the nose in the first ten seconds and that’s the end of his strategy…

… When you go in to make a deal, you don’t start where you want to end up, in the middle there. You start with the most extreme position you can ask for, without getting laughed out of the room, and then negotiate!…

No one should make a deal, though, with someone who changes his mind every few days, who throws entire groups of people under the bus to make himself look better, and who is happy to get the support of people with abhorrent values. Even if that person is the President.

And I don’t get the logic behind your decision.

Even if you absolutely despise Sanders and Clinton, I don’t understand how the GOP candidates are even options for you.

So help me out here. If you’re up for it, I’d love to hear the reasons you’d vote for Trump, Cruz, or Rubio — assuming you’re an atheist who takes your atheism seriously. No judgment from me. I won’t even respond to you. And I won’t “out” you, either, if you’re worried about that.

But I will post something in a few days compiling the reasons you send (without your names/emails attached). I’m really curious if your reasons make any sense to me.

You can reach me here.

March 3, 2016 Texans in Travis County Elect Human Dumpster Fire as GOP Chair
Browse Our Archives
What Are Your Thoughts?leave a comment