Bangladesh’s constitution dates back to 1972, when the country adopted secularism as one of its founding principles. Since then, subsequent governments have made a mess of things:

[The] government of military ruler-turned politician slain president Ziaur Rahman scrapped secularism as the state policy and his successor ex-army chief HM Ershad, who followed [in] his footsteps, made Islam the state religion in 1988.

Assuming power with three-fourths majority…, Prime Minister Sheikh Hasina’s Awami League government revived secularism as one of the state principles but kept untouched the provision of state religion due to the sensitivity of the issue. 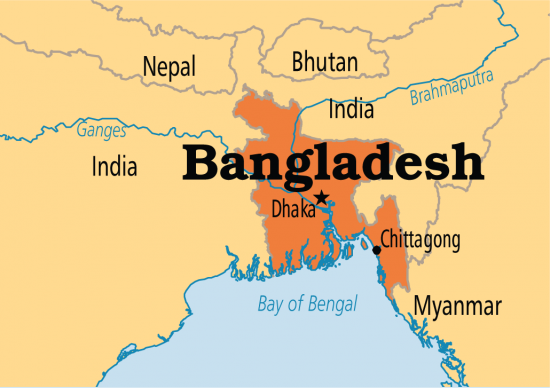 There have been challenges to that confusing state of affairs. Last year, a Hindu lawyer, Samendra Nath Goswami, tried to convince a two-person bench of the High Court that an official state religion is at odds with the professed principle of a secular state. Both Justices granted the matter a brief hearing and then summarily rejected Goswami’s claim. (By the way, the jurists’ names were Mohammad Emdadul Haque and Muhammad Khurshid Alam Sarkar. Make of that what you will.)

But since then, as Islamist violence against non-Muslims has continued to burn through Bangladesh, something appears to have shifted. Ironically, bloody attacks on atheists, Hindus, Christians, and minority Shi’ites have weakened Islam’s position, and the Bangladeshi High Court is said to now consider in earnest whether the original constitution — the one that stressed secular values — should be restored. More here, here, and here.

By the way: While the always questionable Daily Mail appears to get most of the story right (this time), it beggars belief that the paper is entirely silent on one category of Bangladeshi citizens who have been attacked and murdered mercilessly and with special zeal. Notice anything about this passage?

The supreme court in the South Asia nation has began to hear arguments which challenge Islam’s status as the official state religion. It comes after a spate of attacks against people of other religions such as Hindus, Christians, and minorities Shi’ites, which have been blamed on Islamic extremists.

In fairness, a photo caption does note that one act of Islamist violence “saw a publisher of secular books hacked to death,” but that is that. The Mail article contains no mention of, or reference to, atheist victims, including Avijit Roy, Rafida Ahmed Bonya, Faisal Arefin Dipan, Tareq Rahim, Ahmed Rajib Haider, Ahmed Rahim Tutul, Humayun Azad, Asif Mohiuddin, Ananta Bijoy Das, and Niloy Neel.

Google those names; it’s more than the Daily Mail team could be bothered to do.

March 3, 2016
Christian Writer Tells Women How to "Learn Their Place"
Next Post