Woman Who Says Obama Was a Gay Prostitute May Soon Be Elected to the Texas Board of Education March 2, 2016 Hemant Mehta

In news that will make sense the moment I tell you it happened in Texas, one of the candidates who won big in last night’s primary race for the state’s Board of Education was Mary Lou Bruner, a right-wing loon who thinks President Obama used to be a gay prostitute: 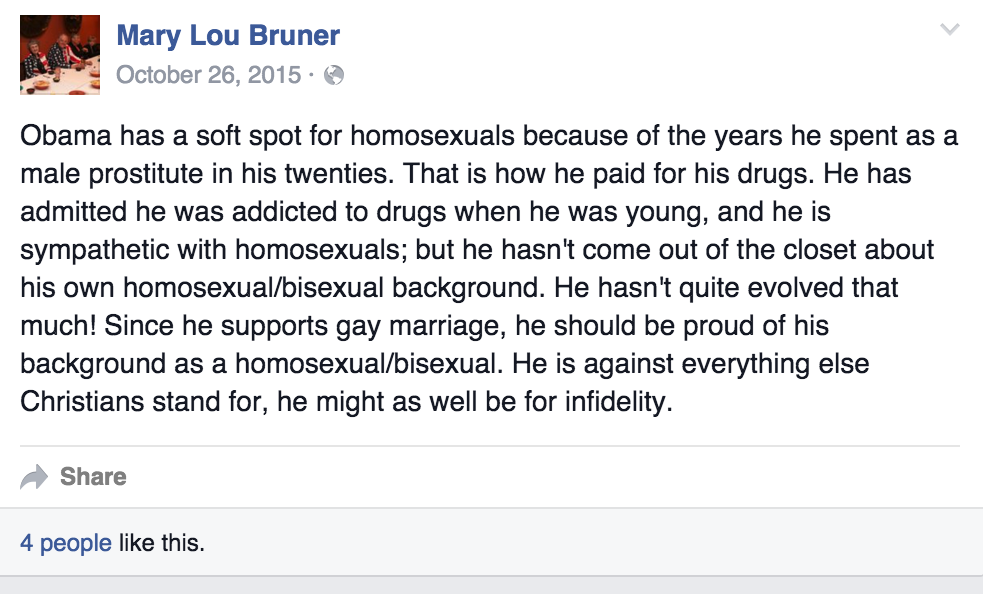 The Texas Freedom Network has even more background on her, and it’s frightening:

Bruner has said evolution “is a religious philosophy with propaganda supporting the religion of Atheism,” and that scientists have ignored and hidden evidence that humans and dinosaurs walked the planet at the same time (screenshot).

Bruner thinks slavery was a minor issue in the Civil War. In July 2014 she wrote that historians were biased against the southern states and rewrote history books once everyone alive during the Civil War had died (screenshot). She also thinks there’s no need for Black History Month, Mexican-American History Month or any other formally recognition of the historical contributions of minorities to the United States (screenshot).

Why does President Obama support LGBT equality? That’s because the president is gay himself, Bruner says (screenshot)…

Bruner was one of three Republicans vying for the nomination to replace the more moderate School Board member Thomas Ratliff on the 15-member board. And she beat her rivals by a wide margin last night.

She didn’t get 50% of the vote, so she’ll now be in a run-off with the second place contender this May, but all signs point to her winning that contest and being the Republican nominee come November.

Congratulations, Texas Board of Education. You’re once again a punchline for the rest of the country.

(Thanks to Laura for the link. Portions of this article were published earlier)

March 2, 2016
Christian Leader Says He's Ditching the "Evangelical" Label; Where Was He for the Past Few Decades?
Next Post