How the Non-Religious Deal with Death March 2, 2016 Hemant Mehta

How the Non-Religious Deal with Death

Phil Zuckerman, professor of secular studies at Pitzer College, has just released a new book analyzing the research that has been done on the growing numbers of atheists, Agnostics, and others who don’t belong to any organized religion. It’s called The Nonreligious: Understanding Secular People and Societies (Oxford University Press, 2016). 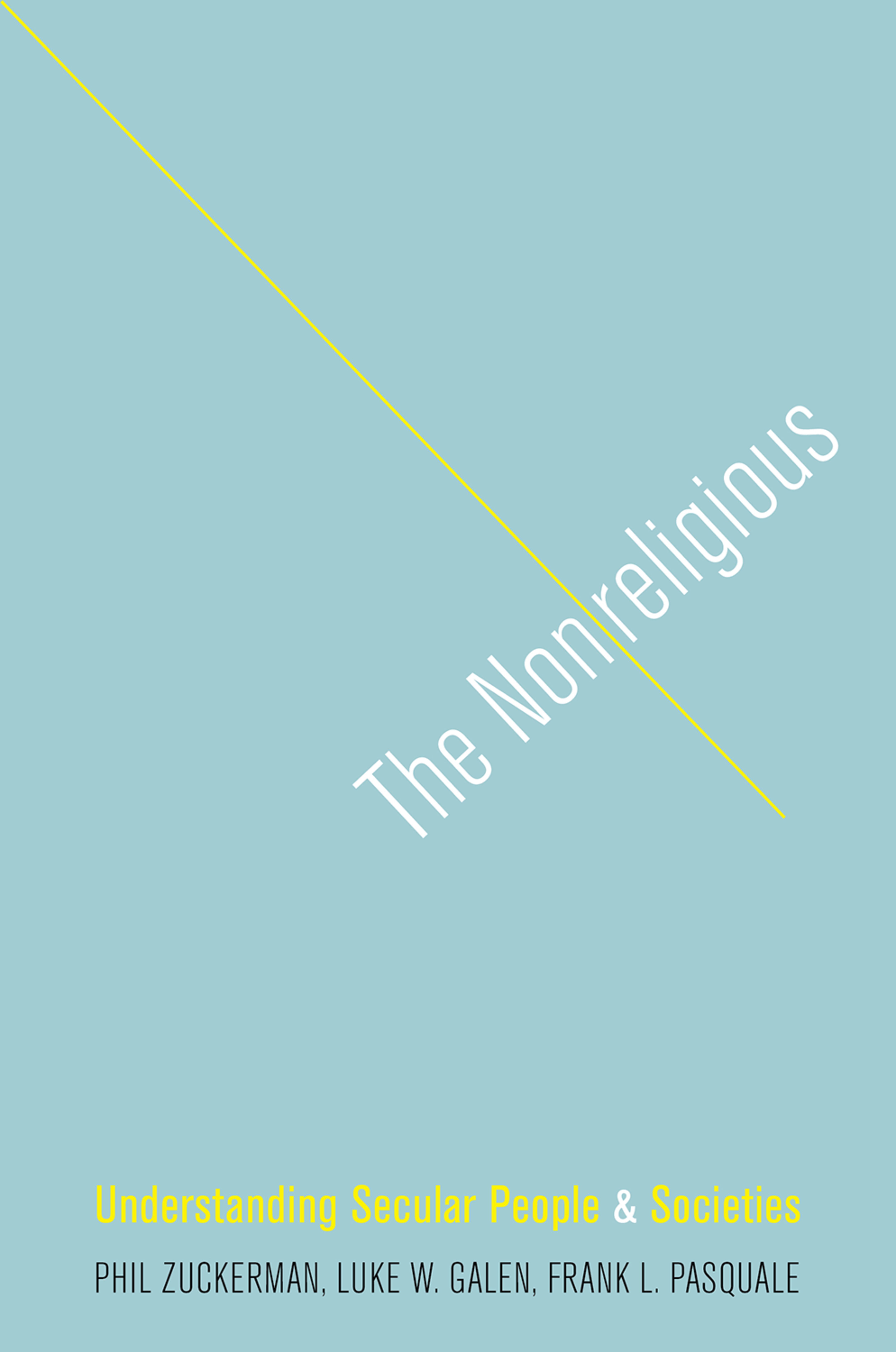 In the excerpt below, Zuckerman and co-authors Luke W. Galen and Frank L. Pasquale discuss the topic of death and suicide:

Perhaps the ultimate existential threat to control, certainty, meaning, purpose, and social connection is the inevitability of death. In his book The Denial of Death, Ernest Becker suggested that awareness of our own mortality threatens our self-esteem and causes anxiety, but our belief in the validity of our cultural worldviews allows us to symbolically — or, in the case of religion, literally — transcend our own mortality. Given that, for seculars, there is no comfort of literal immortality, does this mean that cultural worldviews do not play the same death-denying function for them? According to Becker, the transcendent basis of symbols forming our world¬view (or “hero systems”) functions similarly:

It doesn’t matter whether the cultural hero system is frankly magical, religious, and primitive, or secular, scientific, and civilized. It is still a mythical hero-system in which people serve in order to earn a feeling of primary value … of unshakable meaning. …“Civilized” society is a hopeful belief and protest that science, money, and goods make man count for more than any other animal. In this sense, everything that man does is religious.

For seculars, self-esteem and symbolic immortality may be derived from cultural accomplishments (such as writing a book!), artistic work, material possessions, or an ideology such as humanism. But are these forms of immortality less satisfying than eternity itself? The evidence on whether overt anxiety surrounding death differs as a function of religiosity is mixed. Most studies have shown that religious individuals have less death anxiety, with other studies finding no difference, and still others find that religious individuals are more anxious about death. As with other areas of the literature, these findings are difficult to apply to the nonreligious because of the religiously predominant samples. Experiments in the field called “terror management theory” have tested some of Becker’s ideas about the compensatory role of cultural worldviews in fending off mortality fears. Results suggest that anxiety about death, when made more conscious or salient, causes individuals to reinforce or bolster their cherished worldviews; conversely, any threat to the validity of their worldviews causes an increase in death anxiety, often on an unconscious level.

This raises the question of whether seculars show similar reactions to death reminders as the religious. It appears that, contrary to the “no atheists in foxholes” theory, atheists do not increase their belief in God in response to mortality threats, and thus religion does not serve a death-denying function for the nonreligious. However, evidence regarding whether secular individuals increase secular beliefs in response to mortality, a “worldview defense theory,” is inconsistent. In one study, when reminded of their own mortality, the nonreligious exhibited a defensive reaction, denigrating those who threaten their worldview, whereas religious individuals did not, implying that even nonreligious worldviews can function to ameliorate the awareness of death. Other work finds that when they are reminded of death, all participants, regardless of religiosity or secularity, explicitly polarized and defended their own worldviews (i.e., atheists becoming even more strongly disbelieving), implying that all worldviews, regardless of supernatural content, may be protective against mortality threats. Interestingly, there is some evidence that agnostics, but not atheists, increase their religiosity when death is made salient, indicating that their lack of certainty is more reactive to death anxiety. This would again imply a curvilinear relationship between religiosity/secularity and death anxiety, such that moderately religious individuals experience or report greater fear of death than either strongly religious or nonreligious individuals. This is consistent with a view that confidently held worldviews, whether religious or secular, may help in dealing with existential threats. Clearly, this emerging area needs further research.

As mentioned previously, secular individuals’ worldviews often focus on science or competent governance in order to provide a sense of control and meaning. Those who hold such secular worldviews also have reactions to mortality threats. In one study, individuals prompted to contemplate their own death report greater belief in science compared with those who are not under such stress, indicating that a scientific worldview may serve a compensatory death-denying function. Similarly, as mentioned earlier, the unguided process of Darwinian evolution may be particularly threatening to religious individuals. For example, reminders of participants’ own mortality increased participants’ acceptance of intelligent design theory and rejection of evolution, regardless of their religiosity or preexisting attitude toward it. However, these effects were reversed when naturalism itself was presented as a source of existential meaning (and also among natural-science students, for whom evolution may already provide existential meaning). These reversals suggest that, beyond any scientific merits, attitudes toward evolution or intelligent design can also function as a source of existential meaning and purpose for seculars.

When faced with death, religious and secular alike often search for meaning. In a study about end-of-life concerns, atheists expressed a desire to find meaning in their own lives, to maintain connection with family and friends, and to experience the natural world through the experience of dying. However, some differences are also apparent. In places where religiosity is common, seculars become concerned that care providers respect their nonbelief by not introducing religious elements into their treatment. Another distinct difference is that, relative to the religious, the nonreligious are more open to the use of physician-assisted suicide in the instance of potentially futile suffering. Interestingly, secular individuals show lower preference, relative to the religious, for aggressive measures to extend life. Those who use religion to cope with advanced cancer are more likely to receive intensive life-prolonging medical care near death. It is possible that certain religious beliefs (i.e., the view that life is sacred and can only be taken by God) influences religious individuals’ beliefs about the role of medicine at the end of life. A substantial proportion of the general public also believes that divine intervention or a miracle could resolve a persistent vegetative state when physicians believe treatment is futile, leading to an unrealistically optimistic expectation of survival (which itself is linked to requesting more aggressive medical measures). In contrast, many seculars evidently wish to retain, via their physicians, control of the dying process.

The openness to terminating their lives in the eventuality of suffering extends outside the narrow situation of an illness with little hope of recovery. It has long been noted that countries with lower levels of religiosity tend to have higher rates of suicide. On an individual level, more frequent participation in religious activities is associated with a lower risk of suicide. Conversely, those who never participate in religious activities have higher odds of dying by suicide than those who participate. Because greater religious attendance is associated with decreased odds of a suicide attempt, even controlling for greater social supports, it may not be the social contact inherent in some forms of religious participation that decreases suicide risk but something more specifically intrinsic to religiousness. Religious individuals may have more hopefulness for the future, or secular individuals may lack fear of divine retribution for having taken their own lives.

The Nonreligious is available online and in bookstores beginning today.

March 2, 2016
Woman Who Says Obama Was a Gay Prostitute May Soon Be Elected to the Texas Board of Education
Next Post