Psychic Medium: If Atheists Tell Suicidal People Not to Speak to Me, Blood is on Their Hands March 1, 2016 Hemant Mehta

Psychic Medium: If Atheists Tell Suicidal People Not to Speak to Me, Blood is on Their Hands

Christine Pavlina is a psychic medium who, like everyone else in that world, claims to have the ability to talk to dead people. She has no evidence to back this up, of course, but that’s never stopped people like her from making money off of gullible, grieving people.

In a video released yesterday, Pavlina attempted to respond to some of the arguments offered by atheist critics.

But her first rebuttal shows you just how futile that’s going to be. As if it’s a settled science, she explains: “A Higher Power does exist. Period. End of story. It’s the truth. It’s the light. It’s not debatable. It’s not up for discussion. And it’s not up for opinion. This is a fact.” 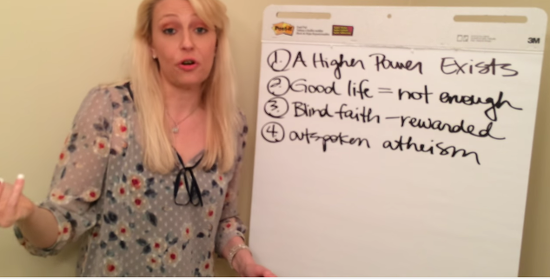 Speaking of atheists who might try to talk a suicidal person out of chatting with her, she says:

You are going to have a lot of karmic issues here. Because let’s say somebody is suicidal and they want to reach out to me. And they see a comment that you wrote on my YouTube channel that goes something like this:

She is a fraud, and if some of her believers read my comments and use a bit of logic, then I have succeeded.

So that’s your karma. And if they actually do commit suicide, that’s on your soul. That’s part of your karma. Because the Other Side probably guided that suicidal person to my YouTube videos in order to help them and bring them healing. So that ends up all being on your soul. You’re responsible for converting people to atheism; you’re responsible for pulling them away from the Divine. So, basically, what you’re doing is you’re betting your karma on the fact that you’re correct. And the Other Side is coming forward and saying you’re incorrect.

I sleep perfectly well at night. I presume that commenter does, too.

If people are suicidal, they need professional help. They need people with training and real qualifications.

What they don’t need is guidance from someone whose counseling credentials amount to a “Bachelor’s Degree in Communication Arts from Loyola Marymount University” and various money-sucks from other psychic mediums.

Skeptics have every right — perhaps even a responsibility — to protect people from those who are trying to mess with their emotions for the sake of a buck. Pavlina, like all mediums, has nothing to offer but false hope. If she would just admit she’s making it all up to make people feel better, I’d be less inclined to criticize her.

But instead of showing us evidence of her powers, she’s going after atheists because we’re the ones willing to protect strangers from throwing their money away on someone whose chief interest is her own pocketbook.

March 1, 2016
Louisiana Judge Rules That Priests Don't Have to Report Abuse if They Hear It During Confession
Next Post

March 1, 2016 Pastor Mark Driscoll Has Been Sued for What Plaintiffs Call a "Pattern of Racketeering"
Browse Our Archives
What Are Your Thoughts?leave a comment