A couple of weeks ago, Donald Trump told a story about a U.S. general who tortured and murdered Muslims with bullets dipped in pig’s blood in order to show them a lesson. 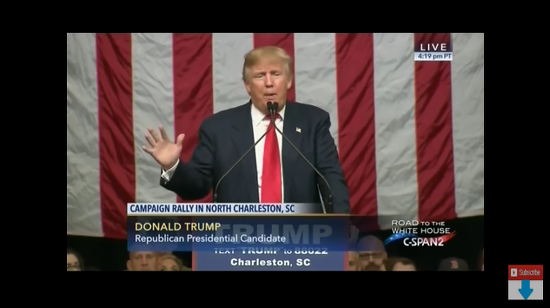 Trump repeated — favorably — an apparent myth about how General John Pershing summarily executed dozens of Muslim prisoners in the Philippines with tainted ammunition during a guerilla war against the occupying United States.

“He took fifty bullets, and he dipped them in pig’s blood,” Trump said. “And he had his men load his rifles and he lined up the fifty people, and they shot 49 of those people. And the fiftieth person he said ‘You go back to your people and you tell them what happened.’ And for 25 years there wasn’t a problem, okay?”

The story appears to be a hoax spread via e-mail forwards, according to rumor tracker Snopes.com, with no evidence it occurred.

That story wasn’t true. And the media reported as much.

So that’s the last time we should hear it, right?

Of course not. This is Donald Trump. When he says something that gets a reaction, he says it over and over and over…

I give you: Trump, yesterday, in Virginia:

Even after he finished, he told the crowd it was a true story no matter what the press said.

But what else would you expect from a guy who hasn’t found a conspiracy theory he couldn’t embrace?

March 1, 2016
Pastor Mark Driscoll Has Been Sued for What Plaintiffs Call a "Pattern of Racketeering"
Next Post