Cartoon Depicts Transgender Rights as a Threat to Women and Children

A frequent theme among anti-trans crusaders is the need to “protect” people — usually women and children — from the horrors of sharing space with transgender people — usually trans women. Bathrooms are a popular target, with the Christian Right painting the need to pee as some sort of nefarious scheme to prey on victims. (Conservative lawmakers are only too happy to pursue legislative “fixes” to this nonexistent problem — going so far as to target kids.)

Despite the fearmongering, though, they rarely explain how, exactly, it’s damaging or dangerous if a trans woman is using the stall next to you. You’re just supposed to be afraid. Very, very afraid.

There’s probably a good reason that they don’t elaborate on these ridiculous concerns. Because when they try to move beyond vaguely defined but visceral fears, their objections are revealed to be utterly baseless and absurd.

Like this cartoon, from “Comically Incorrect” cartoonist A. F. Branco: 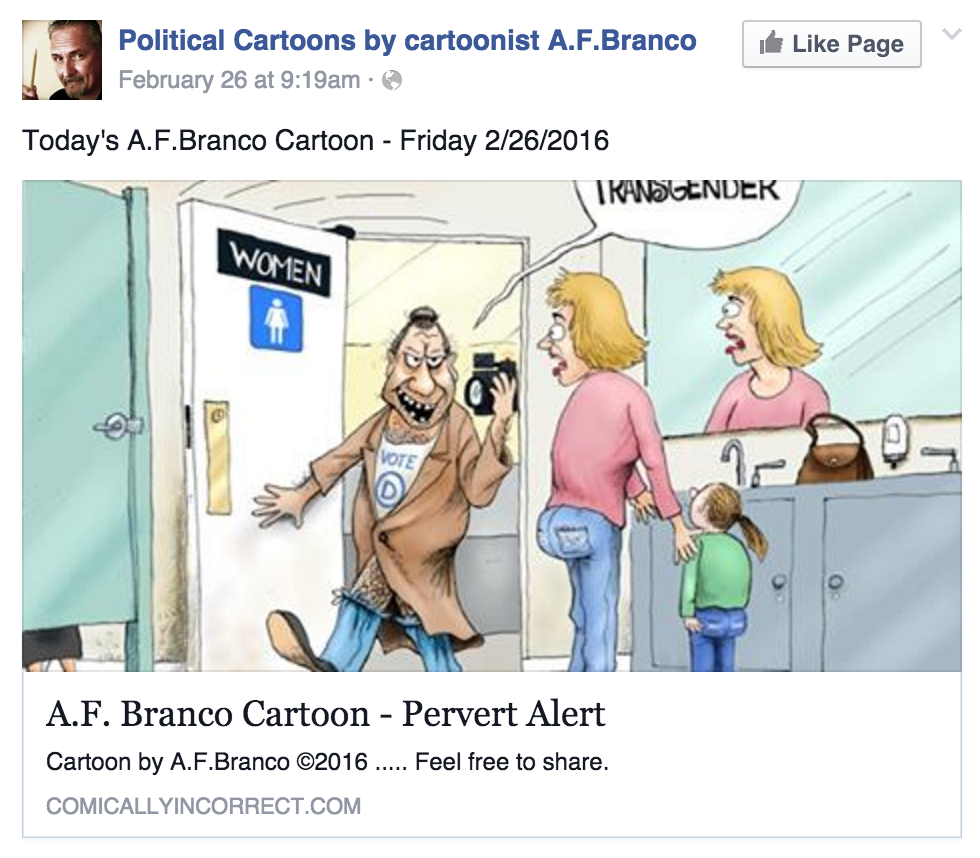 The cartoon depicts an apparently pants-less, trench coat-wearing, camera-wielding creeper entering a women’s restroom, as a horrified mother and child look on. The implication being, of course, that this is not a woman at all, but a man pretending to be a woman in order to gain access to the space. “Relax lady,” he tells the mom. “I’m transgender.” (Naturally, the predator is wearing a Democratic Party “D” t-shirt. Because why not?)

Think about the “argument” this presents and you’ll see how quickly this logic breaks down. First of all, women using the bathroom designated for women doesn’t tear down stall walls. So unless the trench coat-wearing creeper is going to photograph bathroom-goers washing their hands — in the two minutes or so before the police show up — what is the camera going to accomplish? Secondly, who, anywhere, is arguing that people should be able to photograph people in the bathroom? No one. Certainly not LGBT activists.

This is, frankly, a ridiculous argument — anyone peeking into stalls with a camera runs a high risk of getting spotted (regardless of whether or not we exclude some women from the women’s restrooms) and subsequently arrested. This doesn’t change because we’ve begun forcing some women to use the men’s bathroom.

This is just absurd, transphobic fearmongering. The hairy, leering creep is intended to provoke a reaction. But if you actually think about what the cartoon is depicting, it just doesn’t make sense.

And neither does transphobia.

(A version of this post went up yesterday, but we incorrectly identified where the cartoon was being promoted. We’ve corrected that in this post. Apologies for the error. — Hemant)