What a Mormon Leader Really Meant When He Said “There Are No Homosexual Members of the Church” February 29, 2016 Hemant Mehta

I don’t feel good about this, but I think I have to defend Mormon Elder David A. Bednar.

At an event last week, a Chilean questioned asked the Quorum of the Twelve Apostles member a straightforward question: “How can homosexual members of the church live and remain steadfast in the gospel?” Or, to put it another way, can gays and lesbians be faithful Mormons?

We know the Mormon Church is bigoted at its core. We know they fought the Boy Scouts of America from accepting gay scout leaders. We know they now punish children of gay parents unless those kids denounce their parents’ relationship.

But Bednar’s response to the question seemed even worse than all of that: 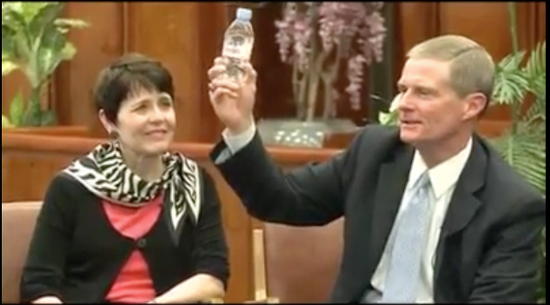 A couple of different outlets are quoting that line as if it’s in step with the Mormon Church’s bigotry. But I don’t think that’s entirely fair.

Bednar’s answer isn’t as bad as it sounds. He’s not saying there are no gay people in the Mormon Church — of course there are. He’s not denying that.

I’m not saying I like that answer. Only that it’s not as dismissive as it seems.

The articles note a “similarity” to something Iranian President Mahmoud Ahmadinejad said in 2007 at Columbia University: “In Iran we don’t have homosexuals like in your country. In Iran we do not have this phenomenon. I do not know who has told you we have it.”

It’s not a fair comparison because Ahmadinejad genuinely believed that. Bednar doesn’t.

In fact, Bednar even went on to reiterate the Church’s current stance on homosexuality: That’s it’s okay to be gay, but you just can’t act on it:

“Simply being attracted to someone of the same gender is not a sin,” he explained. “There are many members of the church who may have some manifestation of that attraction. They honor their covenants, the keep the commandments, they are worthy, they can receive the blessings of the temple and they can serve in the church.”

Like I said before, I still think the Church’s stance on homosexuality is awful. I think people should leave the Church in large part because of their bigotry. But Church leaders give us enough to criticize without us having to take their words out of context.

February 29, 2016
Ben Carson: When I'm President, I'll Overturn the "Ban on Christianity in Our Public Schools"
Next Post

February 29, 2016 One Woman's Fight to Stop Deadly Accusations of Witchcraft in India
Browse Our Archives
What Are Your Thoughts?leave a comment