Lesbian Couple Says Mormon Church is Still Trying to Discipline Them, Years After They Left

I’ve posted multiple times about a lawyer who’s helping thousands of ex-Mormons officially leave the Church for good. And every time, commenters ask the same questions: Why can’t you just leave? Why do you have to go through a lawyer? Why not just walk out and not look back?

The answer is simple: Unless you’re officially off their rolls, they’ll never stop harassing you. They’ll even enlist your friends and family members to bring you back. Without going through the formal process, your escape isn’t complete.

Now we have an example of that playing out.

Leisha and Amanda LaCrone were both raised in Mormon families, but Leisha thought she was excommunicated 15 years ago. Not that she cared — the lesbian couple has five children and they’re very happy. But Leisha recently received this letter in the mail: 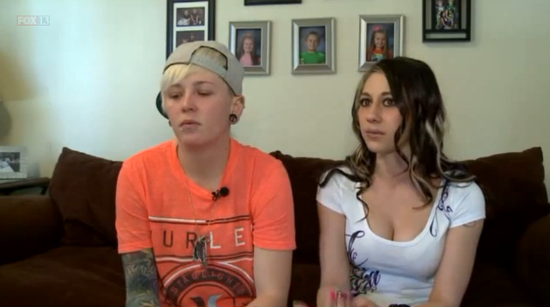 The Bishropic is considering formal disciplinary action in your behalf, including the possibility of disfellowshipment or excommunication, because you are reported to have participated in conduct unbecoming a member of the Church.

Again: This isn’t a threat because Leisha wants nothing to do with the Church, anyway.

But the Mormons didn’t stop there:

Then, they said, came a number of phone calls asking to meet with the bishop.

The two said they declined, and that’s when members of the Church reportedly came to their home, with letters.

“I was pretty angry when I opened it, not understanding why they want us to go to this church court when we don’t attend church,” Leisha said.

According to a Mormon resource site, a disciplinary council can be requested if a person is still on church records. The purpose is to discuss sins with the person, pray, and figure out how to move forward.

Leisha posted the letter on Facebook, where it’s been shared more than 2,000 times as of this writing. The Church won’t comment on it except to say this is a private matter.

Beyond all that, keep in mind the sort of bigotry being perpetuated by the Church. They’re saying that a mother in a lesbian relationship is doing something “unbecoming,” as if there’s anything wrong with her life.

The good news is that the couple didn’t attend the disciplinary council — and they haven’t heard from the Church since.

But they shouldn’t have to deal with any of this. It’s all the more reason for decent people still in the Church to get the hell out of there. And when they do, they need to do it for good. This is the website that will help people leave.

(Screenshot via Fox 13 News. Thanks to Mark for the link)

February 29, 2016 That Explains God's Power
Browse Our Archives
What Are Your Thoughts?leave a comment