Ben Carson: When I’m President, I’ll Overturn the “Ban on Christianity in Our Public Schools”

Dr. Ben Carson, who’s in desperation mode heading into Super Tuesday, is at the point where he’ll say anything for votes. Which, let’s face it, is the same strategy he was using earlier. And we all know where that got him.

His latest attempt at pandering to the Christian base came during a conversation with Pat Robertson at Regent University. Carson said that, if he were elected President, he would do everything in his power to eliminate the “ban on Christianity in our public schools.”

Smart move. Since that ban doesn’t exist — and never has — he just made a promise he can actually deliver on! 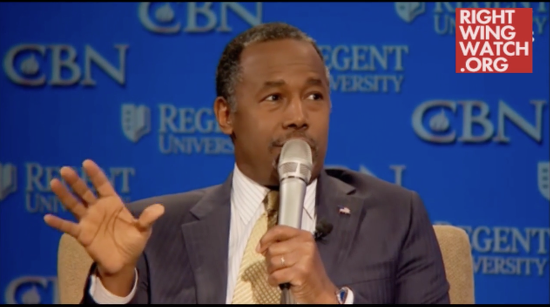 There’s obviously no ban on Christianity in public schools.

The only “ban” that exists is the one that says the government (including administrators and teachers) can’t force Christianity onto everybody.

And a President Carson wouldn’t be able to overturn that unless he wants to burn up the Bill of Rights altogether. He should be careful if he tries that. I’ve heard the First Amendment is really close to the Second.