We all know people who take pictures of their food to post on social media. But I had no idea those pictures caused cancer.

According to Saudi Cleric Sa’d Al-Ateeq, here’s how that works: Women decorate their food for social media (something they never do for their families). The result is that people who see the pictures become envious. And then people get cancer. 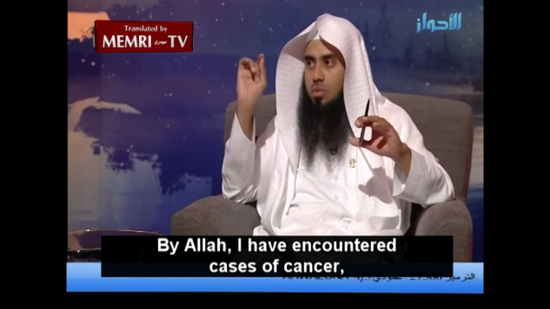 Many women — many of our sisters and our daughters — decorate the food not for the sake of their husbands, children, and family, but in order to take a picture of it.

It’s very important to discuss this. Some women, Allah bless them, pay a lot of attention to decorating the food they cook. They sit for hours on end, “engineering” a cucumber or a tomato, and it is all done so that people will see it. But she never does this for her husband and children.

If it wasn’t for all those apps — Snapchat and others — she wouldn’t have done this.

Unfortunately — and this is a fact — many people were afflicted with envy because of this. By Allah, I have encountered cases of cancer caused directly by pictures posted on social media accounts. By Allah, I saw this with my own eyes. Children got cancer because of pictures circulated [online].

A picture might transmit sorcery. The proof is that if I took your picture, and applied sorcery to it, you will be afflicted accordingly.

So why do we find it difficult to believe that a sorcerer might take your picture from a social media account, print it, and cast sorcery upon it?

This is what passes for intelligent conversation in Saudi Arabia.

Meanwhile, people who criticize this sort of nonsense are being punished with thousands of lashes and thousands of dollars.

February 28, 2016
A Compilation of Stephen Fry's Best Arguments and Comebacks
Next Post

February 28, 2016 "Jesus Also Had Two Fathers" Billboard Celebrates Legalization of Same-Sex Adoptions in Portugal
Browse Our Archives
What Are Your Thoughts?leave a comment