One Benefit to Donald Trump: He Might Dismantle the Evangelical Voting Bloc February 28, 2016 Hemant Mehta

One Benefit to Donald Trump: He Might Dismantle the Evangelical Voting Bloc

Maybe the strangest story coming out of the primary season so far has been that evangelical Christians seem to have no problem voting for Donald Trump, a serial adulterer who doesn’t ask for forgiveness and clearly doesn’t know the Bible.

For all we’ve been led to believe about the importance of religious labels and the culture wars, Trump is winning over evangelicals by being a xenophobic, insult-spewing jackass who offers zero substance and brings only bad ideas to the table.

Cartoonist Nick Anderson of the Houston Chronicle nails it: 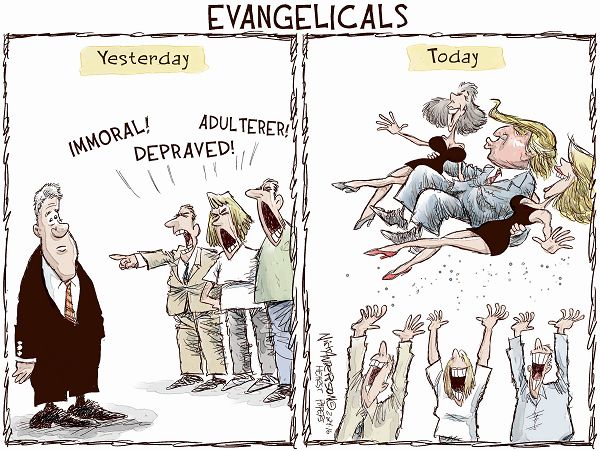 If Trump continues winning, maybe he can take down the evangelical voting bloc along with the Republican establishment. After all, it looks like the people who claim to care so much about gay marriage and abortion are willing to vote for the guy who wants nothing more than a larger platform for himself.

In a way, I guess it makes sense. Trump is basically the equivalent of a megachurch pastor. He loves to promote his own brand under the guise of something bigger and the gullible masses are falling for it.

February 28, 2016 Electing Donald Trump Would Be a "Grave Mistake," but Ted Cruz Says He Would Still Support Him
Browse Our Archives
What Are Your Thoughts?leave a comment