Electing Donald Trump Would Be a “Grave Mistake,” but Ted Cruz Says He Would Still Support Him February 28, 2016 Rachel Ford

Electing Donald Trump Would Be a “Grave Mistake,” but Ted Cruz Says He Would Still Support Him

There are many things to be said about Republican frontrunner Donald Trump — the man who is not sure he can disavow support from former KKK leader David Duke, who wants to solve immigration issues with a wall that keeps growing taller, who fears that immigrants are rapists and other criminals, who wants to defund Planned Parenthood, who is routinely harassed by the IRS for what he thinks is his strong faith, etc.

With this many pitches right down the plate, you’d think his Republican rivals would hit these balls out of the park.

Instead, people like Ted Cruz have said that the wall-building-immigrant-hating-anti-reproductive-rights champion is somehow not conservative enough. Cruz knows that Trump is flying off the deep end. Cruz knows Trump has a temperament worse than children. Cruz knows that a President Trump may nuke Denmark on a whim. Cruz says he has no idea what President Trump will do in office. Cruz also thinks Trump lacks a core set of beliefs and values.

In short, Cruz thinks it would be grave mistake to elect him.

But if Trump is the nominee, he’ll help make that grave mistake a reality. 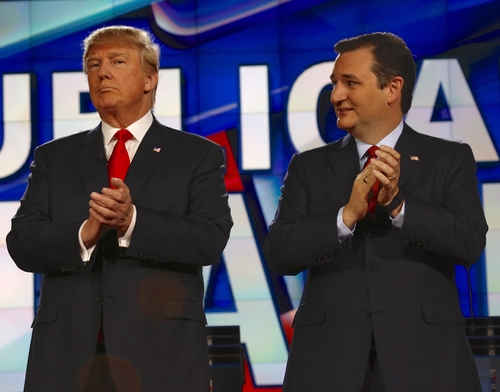 Noting that like Cruz has suggested Trump presidency would be “a grave mistake,” host Jake Tapper asked if he would still support his rival should he win the nomination.

“I will support the Republican nominee. Period. The end,” Cruz replied.

Naturally, Cruz is hoping that he will be the nominee. But it puts his attacks in an interesting light. After all, it’s hard to believe a principled conservative would facilitate the “grave mistake” of electing someone he considers a hysterical wacko who is unfit to have control over nuclear weapons — and who isn’t even a “real” conservative in his mind. You’d think a principled conservative like Cruz would everything in his power to prevent Trump from getting in the White House. Instead, if he’s not the nominee himself, the ever-conservative Cruz says he’ll work hard to get Trump elected.

That might make some sense. In the past, Cruz praised Trump’s honesty and willingness to “take on the Washington cartel.” Plus, of course, Trump hates immigrants just enough to get Cruz’s vote:

“He’s bold and brash, and he’s willing to speak the truth. And he’s taking on the Washington cartel,” Cruz said.

He added that Trump’s focus on illegal immigration and sanctuary cities has captured the attention of many Americans and set him apart from other candidates.

And far from the if-I-must-I-will acknowledgement of today, during the Cruz-Trump honeymoon months, Cruz was proud to own his praise:

“Quite a few members of this field have attacked Donald Trump. A lot of folks in the media have asked me ‘Ted Cruz, will you do the same?’ I have been glad to praise Donald Trump for speaking out boldly and brashly and for focusing on illegal immigration,” Cruz said in an interview with POLITICO’s Mike Allen at the Koch brothers-funded Freedom Partners summer conference in Dana Point, California.

And why not? The Donald was “terrific” back then:

The Establishment's only hope: Trump & me in a cage match.

My, how the times have changed…