Not that you need a reminder of what a disaster a President Donald Trump would be, but during his press conference yesterday, there was a key point that went underreported as the media focused on Chris Christie‘s endorsement of the man.

Trump said near the end of his speech that he would rescind the IRS rule preventing churches from endorsing candidates. 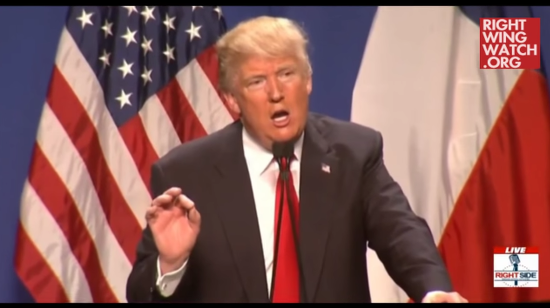 … Some of [the pastors] said, “We love you. We want to endorse you so badly. But we’re afraid we’re going to lose, if we do that, our tax-exempt status.”

And I said, “What’s this all about? That takes you and it makes you less powerful than a man or woman walking up and down the street. You actually have less power.”

So I am going to work like hell to get rid of that prohibition and we’re going to have the strongest Christian lobby and it’s going to happen. This took place during the presidency of Lyndon Johnson and it has had a terrible chilling effect.

As Brian Tashman of Right Wing Watch notes, you can’t logically have “more Christians… than we have men or women in our country.”

Also, the IRS prohibition didn’t get put into place during Johnson’s presidency.

More importantly, though, there’s no reason to believe Christians don’t have political power. There are hundreds if not thousands of Christian special interest groups that lobby on their issues all the time. While churches are prohibited from endorsing candidates, no one’s stopping Christian non-profit groups from advancing their agenda, and no one’s stopping Christians from endorsing candidates.

Keep in mind he said all this as Pastor Robert Jeffress stood next to him in solidarity.

The IRS rule makes perfect sense. In exchange for a tax-exemption, non-profit groups cannot be in the business of endorsing candidates. That includes churches just as much as it does the ACLU.

The real problem is that the IRS hasn’t enforced its own rules even when Christians have openly violated it.

So once again, Trump makes absolutely no sense. I don’t even know if he could remove the prohibition if he wanted to. But he constantly shows us just how dangerous he would be if the Idiot American voting bloc chose to put him in the White House.

February 27, 2016
A Woman is Suing El Al for Having to Switch Seats at the Request of an Ultra-Orthodox Passenger
Next Post