A few months ago, The Nightly Show hosted a panel discussion about the implications of finding water on Mars. It featured host Larry Wilmore, Bill Nye the Science Guy, and two comedians.

It could have been a great conversation. Instead, the comedians kept interrupting Nye’s explanation of what was happening on Mars with really stupid attempts at jokes. 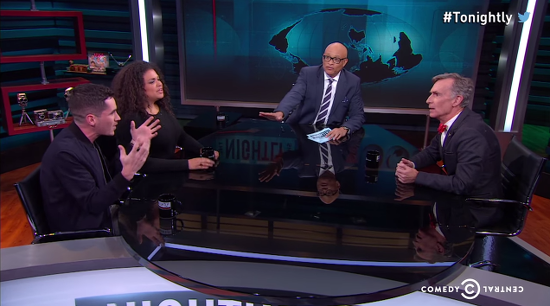 I wrote at the time:

Want to know what it’s like to be a teacher? Just imagine a whole bunch of adults who are super-passionate about their subjects… trying to share their wisdom with a bunch of students who don’t give a damn (and have no problem showing it).

I know it’s a comedy show and the other panelists were more interested in making jokes than fawning over science, but it’s not a far cry from what happens in schools and households all over the country. If you can’t get excited about science when Bill Nye’s explaining it to you right across the table, then what else would it take?!

Speaking for myself, I wasn’t that upset with Wilmore, who is clearly a science advocate and just chose to take a more passive approach with the panel, but it made me question whether this show was worth my time. I love Real Time with Bill Maher. I enjoyed the Daily Show and Colbert Report. This show, which was also billed as a smart take on current events, wasn’t living up to that reputation.

Why bring all this up now? Because last week, Wilmore did an AMA on Reddit, where commenters could ask him anything, and the top question was all about that episode:

A few months ago, a segment from your show received a lot of flak about two of your contributors writing off the importance of discovering water on mars, and it came off as disrespect to your guest, Bill Nye. My question is, did you have any reservations when planning this segment? It seems like a pretty easy read to see that it would have gone poorly, but it still made air. What would you have done differently, if you could go back and do it again?

It was just a conversation. People are allowed to have a point of view. Bill Nye had a great time on that panel. He’s been on the show a couple of times. People are allowed to have opinions. For the life of me, I really don’t understand why people are so upset that someone would disagree with Bill Nye. I was on Bill’s side of that, but still, who cares? It’s just a conversation.

He missed the point. It wasn’t “just a conversation.” It was a waste of time for what could have been an interesting conversation.

It’s not that the panelists were debating whether water was actually on Mars or how significant that discovery would be. It’s that you had one person on the panel who knew what he was talking about, and two people who felt it was their job to prevent him from talking about it.

Wilmore addressed the whole debacle on Wednesday night, reminding his audience that he’s a proud “blerd” — a black nerd — and inviting Bill Nye back on the show to reflect on the episode:

I just want to reiterate, though: the issue wasn’t that Bill Nye was interrupted, but that the discussion of water on Mars was derailed by people who clearly didn’t give a shit about the topic. That’s the fault of the producers for including them.

That said, I know this is a long rant for something that’s really not a big deal, and we’re talking about a single episode of a daily series, and it’s not always easy to find the right mix for any panel. But I would love to see the show take that criticism and make the show even better.

February 26, 2016
An Atheist Delivered a Sermon at a Methodist Church About the Importance of Love and Acceptance
Next Post

February 26, 2016 Another Candidate for Arizona State House Comes Out as an Atheist
Browse Our Archives
What Are Your Thoughts?leave a comment