Donald Trump: The IRS Is Auditing Me Because I’m a “Strong Christian” February 26, 2016 Hemant Mehta

Donald Trump: The IRS Is Auditing Me Because I’m a “Strong Christian”

Donald Trump is doing damage control after last night’s Republican primary debate, during which the other candidates treated him like the fool he is, used him as the butt of their jokes, and responded to his insults with clever one-liners of their own.

The biggest controversy of his own creation may have been his remark that the IRS is auditing him, and that’s preventing him from releasing his tax returns. (Even Mitt Romney says that’s not a legitimate excuse and that Trump can indeed release his tax returns.)

But why is Trump getting audited? It’s not because of any potentially shady business dealings, he says. He told CNN it’s because he’s Christian (5:10 mark): 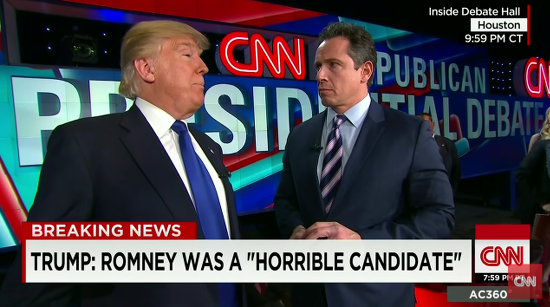 [Host Chris Cuomo: What do you mean religion?]

Well, maybe because of the fact that I’m a strong Christian, and I feel strongly about it, and maybe there’s a bias.

[Cuomo: You think maybe you get audited for being a strong Christian?]

They complain about everything all the time. That doesn’t prove anything.

In fact, that whole Christian Persecution response is bullshit. The IRS isn’t targeting Christians — or conservatives for that matter.

But since Trump can’t defend his “strong” faith by pointing to his knowledge of the Bible, or showing off his church attendance, or speaking the language of evangelicals, pretending to be targeted by the IRS is the next best thing.

February 26, 2016
This is the Disturbing Material Ohio Students Were Taught in a Faith-Based Sex-Ed Program
Next Post