“Nones” Are on Track to Be the Swing Vote… Again February 25, 2016 Lauren Nelson

“Nones” Are on Track to Be the Swing Vote… Again

Much has been said about the peculiar behavior of the Religious Right in this election. Given the racist beginnings of the voting bloc, it really isn’t all that surprising that they are increasingly swinging toward an unapologetic bigot. But while GOP strategists wring their hands over the obliteration of what they’d considered conventional electoral wisdom, they might be missing the point. Instead of worrying about how to consolidate the Religious Right behind a more palatable candidate, they should really be focusing on how to court those who aren’t religious. 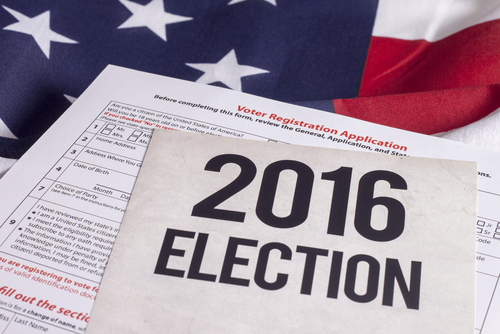 In years past, the numbers associated with this category have elicited a collective shrug from both parties. It’s too fractured, too diverse to be actively courted, particularly when so much emphasis is placed on continuing the American Christian “tradition” in the Oval. To be fair, it is a sort of disjointed confederation of worldviews, and even within it, there’s debate over the term “Nones.” That said, this ragtag group of ideologues isn’t getting due credit.

The growth in the Nones population has been astronomical when viewed in historical and political context. After all, the Nones are a population growing faster than the Hispanic population, which, rightfully, gets a great deal of attention in modern politics. But unlike the Hispanic vote, the Nones have already shown themselves to be a significant voting bloc in crucial swing states. Call it whatever you like but dismiss it at your peril, because this bloc is one that roars at the ballot box.

For instance, in 2012, Mitt Romney did his best to pander to the Religious Right. After all, they had, in the past, been the straightest path to the presidency for a Republican. But his campaign did not consider the group’s shrinking size, the result of established voters aging out, a strong non-religious streak in emerging Millennial voters, and the shift of some of the older religious folk to the Nones category. These Nones were no guaranteed Democratic vote, but with Romney’s assumptions about religious voters and in his subsequent rush to the right, he neglected this segment of the population, alienating them with tough social stances.

And it cost him. Dearly. While Republicans captured the shrinking vote of the Religious Right, Democrats maintained their support among the moderate faithful. This dynamic, paired with a bloc of Nones who found themselves at odds with Romney’s social stances, delivered President Obama the edge he needed in crucial swing states. As legendary (infamous?) conservative blogger Matt Sheffield explained in breathtaking detail:

In 7 key states (Pennsylvania, Florida, Virginia, Wisconsin, Michigan, Iowa, and New Hampshire), Mitt Romney won the majority of the Christian vote but ended up losing overall because he was defeated so soundly among non-Christians.

Even though the state is famous for its religiosity, in Iowa, Nones were indisputably the margin of victory for Obama. According to exit polls, Romney won the votes of the 62 percent of Iowans who called themselves Protestants (53-46) and the Catholic 26 percent (52-47) but he overwhelmingly lost the None vote 75 to 22 percent. With its overwhelmingly white population, Iowa was Romney’s to lose. And he did — by doing so poorly among white voters with no religious affiliation. In the end, the former Massachusetts governor lost the Hawkeye State by less than 100,000 votes.

Non-Christians also put Obama over the top in Pennsylvania, a state which Romney’s top advisers believed was “really in play” right up until Election Day. And they were right — so long as one only looked at the vote of the Christian faithful (77 percent of the electorate). Romney actually managed to win both the Protestant and the Catholic votes quite narrowly, 51-49 and 50-49 respectively, but his tremendous loss among the 12 percent of Pennsylvanians who were not religious overwhelmed his share of the Christian vote. Because he lost the None vote 74-25, Romney ended up losing the state 52 to 47 percent.

The same thing happened in Florida as well, another state that Romney was counting on winning. He cleaned up among the 51 percent of Protestant voters (58-42), won the 23 percent Catholic vote (52-47) but ended up losing the 15 percent None vote 72 percent to 26 percent. He also sank among the non-Christian religious as well. In the end, Romney lost the state by just 74,309 votes. Had he done just a little better among non-Christians, Romney would have been able to put the Sunshine State into his column.

Virginia was another state that was Romney’s to win had he done better among non-Christians. According to exit polls, Romney captured small majorities among Protestants (54 percent to 45 percent) and Catholics (55 to 45) but was clobbered among non-Christian believers (78-22) and among those with no religion (76-22).

The None vote also cost Romney the state of Wisconsin. As with the other states examined above, Romney won the Catholic vote (56 percent to 44 percent) as well as the Protestant vote (53 to 45 percent) but lost so overwhelmingly among non-believers (73 to 25 percent) that he ended up losing the Badger State 53 to 46 percent.

The same thing happened in Romney’s native Michigan where he won among Protestants 51 to 48 percent and among Catholics (55 to 44 percent) but lost so overwhelmingly among non-believers that he ended up losing the state 54 percent to 45 percent.

The former Massachusetts governor also lost New Hampshire despite winning the votes of both Catholics (54 percent to 46 percent) and Protestants (57 percent to 42 percent). Because he lost the None vote so badly (71-28), Romney ended up losing the state’s electoral votes by less than 40,000 votes.

Based on the data above, it is safe to say that the Godless Gap cost Mitt Romney the election.

He’s not wrong. Based on this analysis, Sheffield concluded that if Romney had spent less time catering to the Religious Right and more time on secular outreach, it’s plausible that he’d have beaten President Obama by as many as 304 electoral votes.

Fast forward. In today’s political climate, it’s sort of weird to look back at Romney’s campaign and see him as a moderate, but when contrasted with the candidates surging in today’s GOP field, that’s exactly what it looks like. Compared to Ted Cruz, Marco Rubio, and Donald Trump, Romney looks downright congenial.

Does this mean the Nones will absolutely swing the election to the Democrats again? There’s no guarantee here, but there’s certainly a case to be made that it will. Though it looks unlikely, if Cruz or Rubio somehow grab the Republican coronation from Trump, the race could very easily mirror the 2012 trend. Both candidates are overtly religious and not shy about it. But if barely religious Trump continues to blaze forward and takes the cake in Cleveland this summer, things get more complicated.

Well, the narrative gets more complicated, at least. Trump has long campaigned on the idea that he can capture the independent vote. And among independents who register to vote in Republican primaries, that’s probably true. But in the general electorate? He’s way overstating his claim.

For starters, outside of bravado, Trump has pointed to polls indicating some support from independents. Thing is, those independents he’s pointing to are independents in terms of party registration, but self-identify as Republicans. These were never actually independent voters. They were always going to skew right, regardless of their registration.

And when you look beyond the constraints of that poll to favorability ratings among Republicans, Democrats, and Independents, a different picture emerges. As it turns out, Trump is deeply unpopular. Like, the largest net negative favorability rating out of anyone on either side of the fence, and that’s not changing in a beneficial way as time goes on. As Nate Silver explained over at FiveThirtyEight:

This is not just a recent phenomenon; Trump’s favorability ratings have been consistently poor. It’s true that his favorability numbers improved quite a bit among Republicans once he began running for president. But those gains were almost exactly offset by declines among independents and Democrats. In fact, his overall favorability ratings have been just about unchanged since he began running for president in June.

So on the surface, Trump’s appeal among independents — often considered the bulk of the Nones — is nil. But when you dive further into the Nones from across the spectrum, the odds of Trump being able to reverse what happened to Romney in 2012 look even more remote. In a January Pew Research Center study, they asked the religiously unaffiliated to weigh in on what kind of president each of the candidates would be. 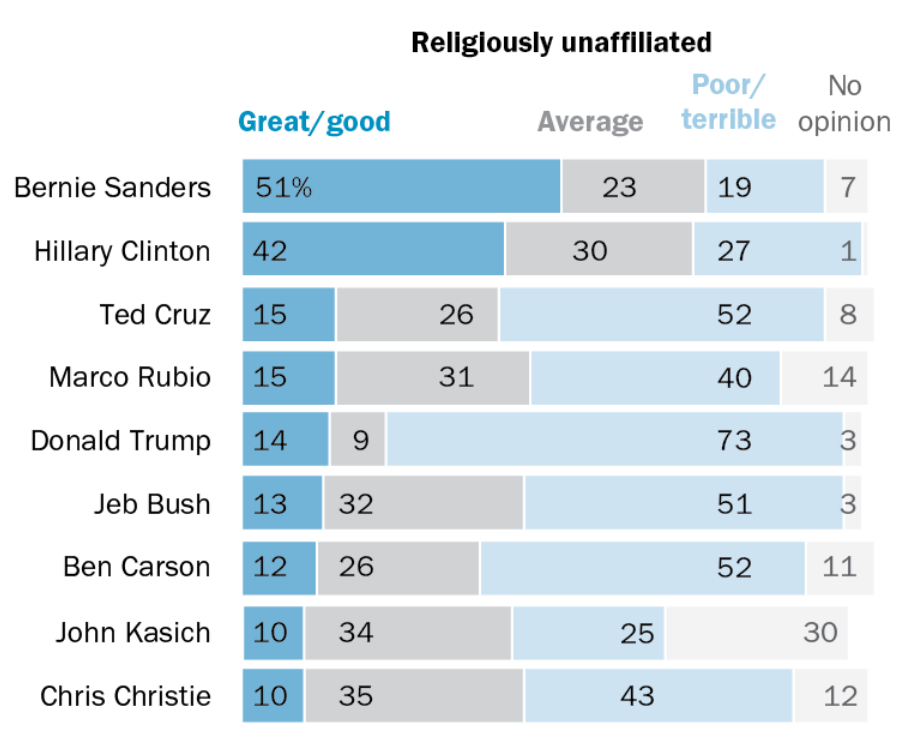 As you can see, Hillary Clinton and Bernie Sanders did pretty well, with 42% and 51% respectively saying that the candidates would be a great or good president. Trump had 15% say he’d be great, which was more than Jeb Bush, Ben Carson, John Kasich, and Chris Christie got. But that’s not the important part.

A whopping 73% of the Nones said Trump would be a poor or terrible president.

I don’t want to tell you to take a deep breath, because given the options on the Republican side, none of us can afford complacency. But when you consider all the data — when you look at the boom in Nones in the American population, when you look what’s happened with the Nones vote in the face of social conservatism in the past, when you look at how the Nones are already reacting in this electrified election — it looks bad for the GOP’s White House dreams.

And it’s us Nones who might just be the swing vote that seals the deal.

If that doesn’t encourage you to get out and vote, I don’t know what will.

February 25, 2016
Former Alabama Councilman Wants "One Lord, One Faith, One Baptism" on City Signs
Next Post