Earlier this month at Hollister Middle School in Missouri, this was the sight at lunchtime: 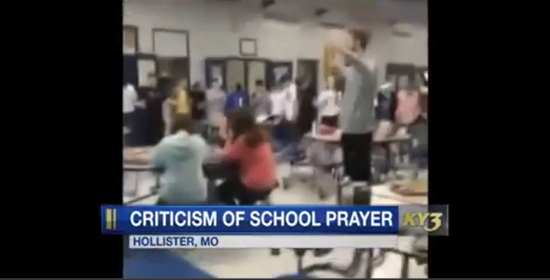 That grainy cellphone footage shows Robert Bruce, a local chapter director for Christian group KLIFE, apparently leading a prayer in the middle of a lunchroom as students stand around him. It’s obviously something that administrators need to stop, and that’s why the Freedom From Religion Foundation wrote a letter to the District:

The letter alleges the school district gave Mr. Bruce unique access to a captive audience of students to proselytize them, and that the prayer made non-Christians feel like outsiders.

Patrick Elliott, a lawyer for FFRF said in a statement:

“Giving the group access to all students as part of school programming suggests that the school district has preference not only for religion over non-religion but also evangelical Christianity over other faiths. This sort of entanglement between religion and public education is inappropriate.”

So how did Dr. Brian Wilson, the Superintendent, respond? By ignoring the letter and giving Bruce a giant thumbs up.

“Our school practice is… we are not going to promote any particular religion. However, we are also not going to inhibit that religion either,” says Wilson.

The school says Bruce asked to join students for lunch. The school obliged, as they would for parents or other community leaders.

The superintendent says Christian students at the school have been initiating prayers during lunch, and that day, the students asked Mr. Bruce to participate in the prayer.

While the students are welcome to form their own prayer circles, they cannot ask an outside preacher to join them during the school day, just as they can’t ask a faculty member or coach to do the same. The kids may not know the rules, but the adults sure as hell should.

Maybe the school needs a few Satanists to sign the paperwork and come inside the school, just in case a few rebel students want them to join in on a lunchtime invocation.

In the meantime, FFRF may have to file a lawsuit on behalf of the parent who alerted them to this problem.

(Screenshot via KY3. Thanks to Ranger for the link)

February 25, 2016 Answers in Genesis Discovers Polyamory; Horror Ensues
Browse Our Archives
What Are Your Thoughts?leave a comment