This Pastor is Sleeping Outside in the Cold to Represent His Church Excluding LGBT People February 24, 2016 Camille Beredjick

It’s the job of a church leader to model empathy, kindness and compassion — something that can be hard to do when your church teaches discrimination. But one pastor wants to show his church what it really feels like to be cast away by your congregation.

Rev. Michael Tupper, the pastor of Parchment United Methodist Church in Parchment, Michigan, is calling attention to his church’s exclusion of LGBT people by sleeping outside his home in a tent for 175 consecutive nights. In February. In Michigan. 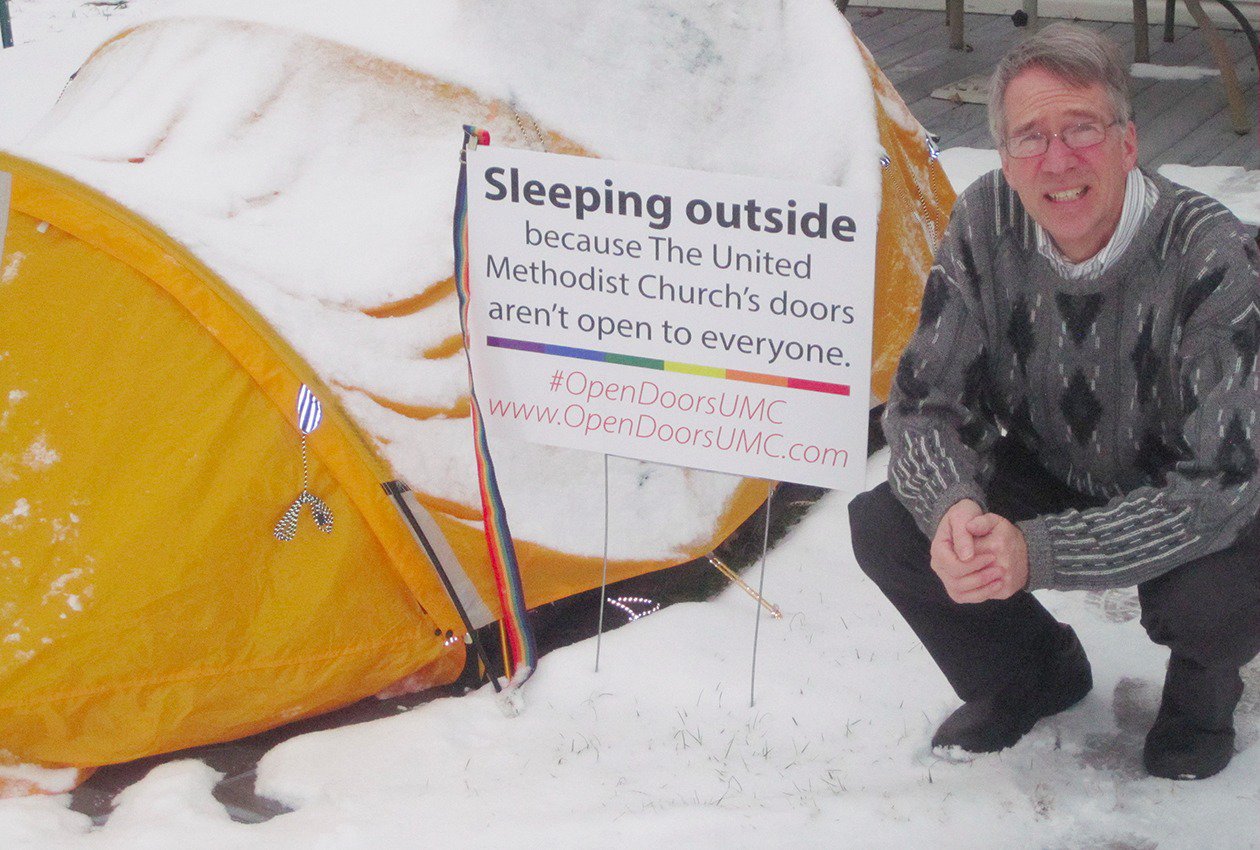 Tupper’s foray into LGBT activism began last year, when he was charged by church officials for officiating his daughter’s wedding to another woman. The UMC’s swift response showed him how deeply discrimination runs in the church, and he decided to fight back.

After he was brought up on charges by church officials for performing the same-sex union, Tupper pitched a tent outside the office of the man tasked with handling his case, hoping to dissuade him from prosecuting. When the case ultimately moved forward, Tupper returned to Parchment, where he is now vowing to sleep outside his house for 175 consecutive nights in protest — no small feat in Michigan, where snow is a constant and where temperatures often drop to frigid levels in winter.

“Most nights it gets into the 20s. It’s gotten down to 5 degrees,” he said, noting that he sleeps in a sleeping bag tucked inside another sleeping bag. “Yeah it’s cold. But I’ve managed.”

The protest, he said, is about more than his case — it’s about how the church treats LGBT people like his daughter.

“It’s to symbolize how our church — particularly the United Methodist Church — is pushing LGBT people outside,” he said. “It symbolizes how we push LGBT people out of the church and into the cold.”

Tupper is also planning to set up his tent outside the UMC’s General Conference in Portland, Oregon in May. Methodist leaders are expected to vote on their official position regarding same-sex marriage during that time, and LGBT Christian activists are hoping that LGBT issues overall will play a large role at the conference:

Other Mainline Christian groups such as the Presbyterian Church (U.S.A.) and the Episcopal Church have voted to embrace same-sex marriage and LGBT ordination at their denominational gatherings in the past few years, sparking hopes that the UMC — the largest Mainline denomination in the country with around 7 million members — could follow suit. Activists note that there is already widespread support in American pews (an April 2015 Public Religion Research Institute poll found that 67 percent of U.S. Methodists said they backed same-sex marriage) although there is concern that delegates from more conservative factions of the UMC’s global body could sway the vote against inclusion.

For Tupper, it will be another huge moment of visibility, both for his personal story and for the greater LGBT Methodist community he’s fighting for:

“I’m hoping to encourage those delegates to move towards more inclusion of LGBTQ people, and for them to be ordained as pastors,” he said. “[General Conference] is the only time when we can make policy change, and change isn’t going to happen unless we take it out from under the table to help people see what our policy is doing to people.”

When asked why he is so willing to risk his personal wellbeing — not to mention his ordination — for the cause of LGBT equality, Tupper explained that it ultimately comes down to the two things that got him into the God business in the first place: faith and family.

“It’s a very small sacrifice to pay compared to the experience that my daughter and other LGBTQ people have had in the church… the rejection they’ve experienced is so much more than my little physical discomfort,” he said. “It’s a God thing… I’m willing to do it for my daughter.”

Chills. No matter how many Methodist officials staunchly defend discriminatory practices, there’s at least one person like Tupper who will literally wait out in the cold until change happens. He’s got one lucky daughter (and daughter-in-law!), and a whole congregation who hopefully realizes how important his gesture is.

(Image via #OpenDoorsUMC. Thanks to Jaynee for the link)

February 24, 2016 The Duggars Are Returning to Television... Sort Of
Browse Our Archives
What Are Your Thoughts?leave a comment