HPV is the most common sexually transmitted disease, due in no small part to the fact that there are a slew of different strains, many of which do not generate any symptoms. So unless you’re getting checked on the regular, you could easily be passing it along to your partner(s) without realizing as much. That might not matter much in most cases, as the majority of HPV strains will go away on their own. Other strains, however, do come with major health risks. HPV 6 and 11, for instance, are responsible for 90% of genital warts cases. HPV 16 and 18, on the other hand, are responsible for more than 70% of cervical cancer. 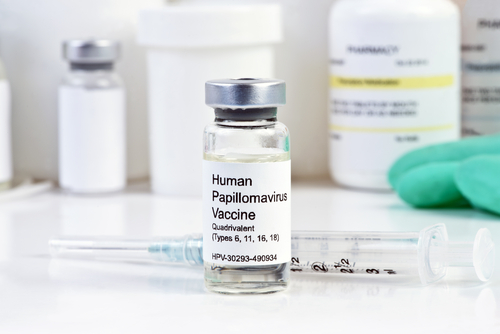 There’s not an app for that, but there are vaccines that were introduced about 10 years ago. Though they did not protect against all 100 HPV strains, Gardasil protected women against four particularly deadly strains while Cervarix protected against two. And wouldn’t ya know it, the use of these vaccines has produced some pretty fantastic results. As the New York Times reports:

A vaccine introduced a decade ago to combat the sexually transmitted virus that causes cervical cancer has already reduced the virus’s prevalence in teenage girls by almost two-thirds, federal researchers said Monday.

Even for women in their early 20s, a group with lower vaccination rates, the most dangerous strains of human papillomavirus, or HPV, have still been reduced by more than a third.

“We’re seeing the impact of the vaccine as it marches down the line for age groups, and that’s incredibly exciting,” said Dr. Amy B. Middleman, the chief of adolescent medicine at the University of Oklahoma Health Sciences Center, who was not involved in the study. “A minority of females in this country have been immunized, but we’re seeing a public health impact that is quite expansive.”

This, paired with recent reports about a new vaccine that protects against 10 strains, is fantastic news. But there’s one caveat. Did you spot it?

A minority of females have been immunized.

Now, you might be asking yourself, “If this vaccine is so successful, why is that the case?” It’s the right question, but you’re not going to like the answer.

Because HPV is most frequently transmitted via sexual contact, the Religious Right has been incredibly successful as framing the vaccine as encouraging promiscuity among young girls. Such allegations are particularly poignant because of the age at which it is suggested the vaccination take place: 11.

They’ve been wrong on such subjects before, but that hasn’t stopped them framing what should be an issue of public health (not unlike measles) as an issue of religious freedom. This isn’t about the lives of millions of women for years to come. No, it’s about the government trying to undermine their traditional values on the subject of sexual activity outside of marriage.

It may sound like lunacy, and it is, but it’s been effective. Despite the efficacy of the vaccines, only two states and Washington D.C. currently require them in their vaccination schedules. In Texas and other states, the “traditional values” opposition has crushed any effort to follow suit. It’s at a point where, no matter which institutions and experts endorse the idea, the battle is lost before it’s begun.

But it’s not just an issue in politics. The Religious Right’s smear campaign against HPV vaccinations has greatly impacted parental perceptions across the spectrum and, as a result, physician recommendations. A study released in 2015 showed that physicians are less likely to suggest children be vaccinated against HPV than they are to recommend tetanus and meningococcal vaccines.

The reason? The conversations required to convince parents take much longer and involve such testy subject matter that physicians feel uncomfortable. That’s a problem when one of the key factors in convincing a parent to vaccinate their child is strong advocacy from a healthcare provider.

Are the results of vaccinating against HPV fantastic? Absolutely. But let’s not forget that they could be much, much, much better. The vaccination rate of young girls in Rwanda is 93%. In the U.S., it’s only 40%. That’s utterly absurd.

Allowing religious opposition to a vaccine that prevents death is unacceptable. Our girls deserve better.