The idea of empowered girls who understand their biology is not something that seems to sit well with the Archbishop of St. Louis, Robert Carlson. In a letter to local priests, scout leaders and parishioners, he advised

… each pastor that allows Girl Scout troops to meet on parish property to conduct a meeting with troop leadership to review these concerns and discuss implementing alternative options for the formation of our girls. 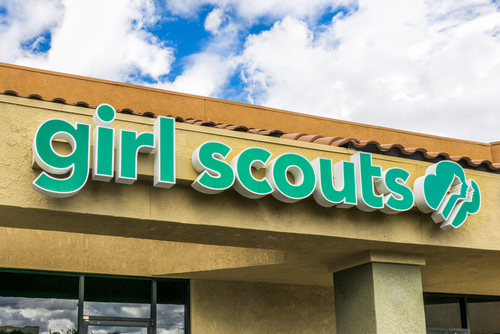 So why would the parish be looking to oust Girl Scouts? Well, because they do absolutely horrible things, like:

WAGGGS [World Association of Girl Guides and Girl Scouts’] continued promotion of contraception and “abortion rights” on behalf of its girl members, the majority of whom are minors

Other than scandalizing pastors and parents, the fact that the Girl Scouts advocates for the reproductive rights of its members is really not shocking stuff. WAGGGS obviously supports the idea that women have the right to control their reproduction as they see fit and to maintain bodily autonomy. Just as obviously, the Catholic church doesn’t agree.

While the fact that WAGGGS supports those rights both before and after the magic number 18 may seem shocking, there’s actually nothing shocking about it at all; it’s just consistency with their position, that female human beings have reproductive rights. This is probably why, even though the archbishop notes that the girls whom WAGGGS advocates for are minors, he doesn’t elaborate on the significance of their age.

If, however, parents and pastors read those things into his comments about abortion rights, well, so be it.

Among his other points are

Organizations that GSUSA promotes and partners with are conflict with Catholic values, such as Amnesty International, Coalition for Adolescent Girls, OxFam and more. This is especially troubling in regards to sex education and advocacy for “reproductive rights” (i.e. abortion and contraceptive access, even for minors)

If the Church was capable of any kind of deep introspection, these objections would certainly merit it. After all, when your organization is threatened by feminism and the empowerment of girls, when you’re opposed to girls understanding their own biology, maybe feminists and education aren’t the problem.

But the Church being what it is, that’s not likely to happen anytime soon. In the meantime, Carlson has another point of contention: tolerance.

In addition, recent concerns about GSUSA and their position on and inclusion of transgender and homosexual issues are proving problematic.

Once again, what Carlson finds “problematic” is little more than basic human decency. Along the same lines, he notes that he has “concerns” about the Boy Scouts:

While the new BSA leadership policy currently offers some protections to religious organizations, I continue to wonder in which direction this once trusted organization is now headed.

The “protections” he cites are exemptions for church-based troops, allowing them to discriminate on the basis of sexual orientation.

The menace of educated girls, though, cannot be allowed to stand unchecked. To that end, the archbishop is disbanding the scout committee and reforming it with an eye toward the pursuit of more wholesome groups.

… I ask that you carefully study each organization and strongly consider offering one of these [alternative religious] programs in your parish instead of Girl Scouts.

While continuing to serve our Catholic girls involved in various scouting programs, this committee will also reflect our ongoing commitment to educating and forming all young women.

The last line, I can only think, was used ironically, considering that one of the cornerstone gripes the archbishop expresses with the Girl Scouts is that girls will be exposed to ideas and people who aren’t Catholic-approved. Education, in this sense, is not education at all, but indoctrination; that girls may encounter non-Church sanctioned information is one of the very reasons that Girl Scouts is now being targeted.

On the other hand, if conservative Christians can have their own opposite meaning of “religious freedom,” why not redefine “education,” too?

February 24, 2016 Turner Classic Movies Will Air a Series of Films Condemned by the Catholic Church
Browse Our Archives
What Are Your Thoughts?leave a comment