Wisconsin Governor and fallen presidential tribute Scott Walker has made no secret of his extreme anti-abortion views — being so fanatical that he can’t even bring himself to support abortion exceptions to save a woman’s life, because, you know, “pro-life.” 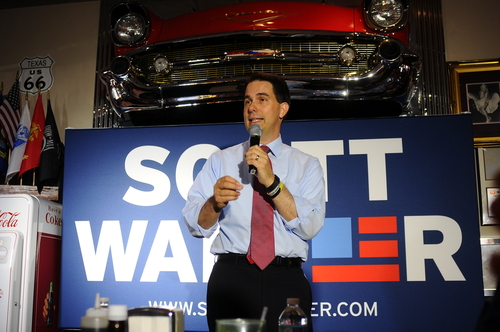 So it’s little wonder that he chooses extreme anti-choice people as political appointees. But if you think that stops at abortion, you would be very much mistaken. These “pro-life” champs are so opposed to women’s reproductive freedom that they also crusade against the one thing that is actually proven to reduce unplanned pregnancies (and abortion): contraceptive use.

Appointees like Lisa Erickson, now appointed to the UW Board of Regents:

Lisa Erickson of Osceola was appointed to fill the non-traditional student slot on the Board of Regents. The mother of four, Erickson is a crisis pregnancy counselor at Tri-County Life Care Center, an affiliate of Minnesota-based network TLC Options for Women. The organization has long “warned not only of the horror of abortion but also the dangers of contraception and promiscuity,” according to its website.

Crisis pregnancy centers are notorious for using scare tactics and outright lies to push their anti-choice agenda, and TLC’s comments on the “dangers” of contraception certainly don’t indicate integrity.

On the contrary, for a “pro-life organization, dedicated to the belief that everyone has the right to life from conception to natural death,” scaring people away from the most effective and practical means of preventing unwanted pregnancy (and, thus, abortion) seems counterintuitive.

Unless, of course, “pro-life” is a euphemism for “anti-sex,” in which case it makes all kinds of sense.

Erickson isn’t the first, or even most prominent, anti-choice and anti-birth control appointment by Walker. His Supreme Court appointee Rebecca Bradley supported a 2006 bill to allow pharmacists to refuse to fill birth control prescriptions based on the pharmacists’ religious beliefs.

In a column at the time, she equated preventing pregnancy with murder, saying

“Proponents of ‘choice’ oppose such conscience clauses because they interfere with the elevation of women’s convenience over pharmacists’ objections to being a party to murder,” she wrote.

Women, she argued, should just make plans to obtain

… contraceptives from another pharmacy, the nearest Planned Parenthood or an emergency room.

Never mind the fact that there’s no guarantee that there will be another pharmacy in town — much less a Planned Parenthood, particularly if “pro-life” advocates like Bradley have their way. Just like men, women should be able to get the care they need without the judgment and interference of religious pharmacists; a pharmacist’s beliefs should not dictate a customer’s access to medicine prescribed by her doctor. But this is conservative “religious freedom” we’re talking about. And, as we all know, that means the “freedom” of Christian conservatives to push their beliefs on everyone else.

Still, when it comes to these anti-choice conservatives, their “pro-life” positions do not focus on the preservation of life. Rather, the unifying theme is taking reproductive choices away from women. Even if it would mean fewer abortions. Even if it would endanger women’s lives to do so. Life is a secondary consideration to penalizing sexually active women.