After comparing gay people to animals earlier this month, boxer Manny Pacquiao offered a half-apology, noting that he was just exercising his faith and that he would pray for gay people. After that, Nike dropped their sponsorship of him. At that point, Pacquiao doubled down on his homophobic beliefs, posting a Bible verse that calls for putting gay people to death (along with a verse that reflects on being hated for God’s sake). And then, after a while, he took it down.

When Olympic medalist and former UFC Women’s Bantamweight Champion Ronda Rousey was asked about the comments, she offered a far different religious perspective than Pacquiao’s: 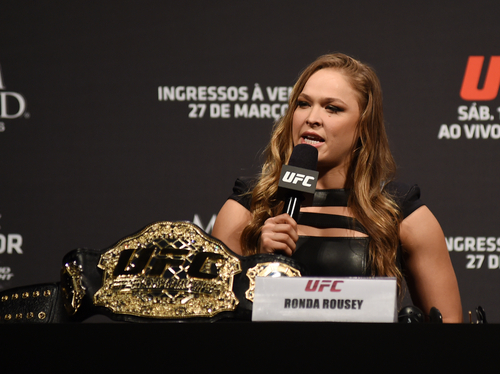 Rousey, who was only told of Pacquiao’s comments Tuesday, responded as well. And she took a rather insightful tact in doing so.

“I understand that a lot of people use religion as a reason to be against gay people, but there was no ‘Thou shall not be gay,’” Rousey told TMZ. “God never said that, and I really think that our Pope now is boss. He was saying something the other day that religion should be all-encompassing and should be about loving everyone. And I think sometimes people take the wrong message.”

Neither Rousey nor Pacquiao is wrong here. Unfortunately, that’s the thing with religion: it’s full of all sorts of contradictory concepts like love and killing people based on who they love. But what parts of your religion you choose to prioritize is pretty telling.

For instance, if you choose to ignore the rules that apply to you and focus instead on who you think should be killed, well… you may just be a sanctimonious bigot.

February 24, 2016
Christian Pastor Defends Slavery Because the Bible Condones It
Next Post

February 24, 2016 This is What the Religious Freedom Restoration Act Looks Like in Every State
Browse Our Archives
What Are Your Thoughts?leave a comment