Christian Pastor Defends Slavery Because the Bible Condones It

In the wake of Justice Antonin Scalia‘s death, much has been made of his doctrine of Originalism, interpreting the Constitution as the Founders envisioned it, even though they couldn’t have known about the issues we’re dealing with today. One of the biggest rebuttals to Scalia’s theory has always been the issue of desegregation. The Founders clearly didn’t want to see the children of slaves and the children of slaveowners on equal footing, but no decent person today would support segregated schooling. So how would Scalia have voted in Brown vs. Board of Education, the case that eliminated segregation in schools? His response was always very awkward as he tried to square the circle and reconcile his Originalism with a case that clearly went against it.

Which brings me to Pastor Steven Anderson.

But doesn’t the Bible condone slavery? How does he handle that issue?

He responded in a sermon clip posted to YouTube: 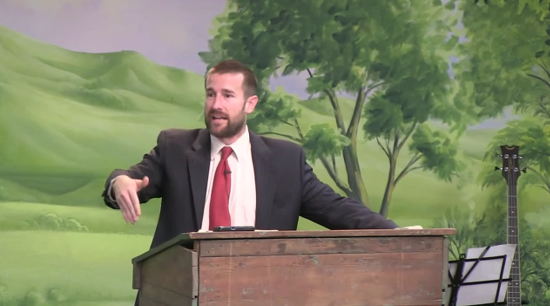 People will try to come at us — usually atheists or people like that — they’ll come at us and say, “Well, the Bible is wrong because the Bible condones of slavery.” We’ve all heard that before, right?

But here’s the thing about that, is that if the Bible condones slavery, then I condone slavery. Because the Bible’s always right about every subject…

He later rationalized this perspective by saying that the Old Testament didn’t even use the word “slave,” as if terminology was his way out of the discussion. But even when the idea of slavery was brought up, he said, it was about someone paying off a debt or paying a fine for a crime.

Because the Bible was referring to people stuck with student loans…

Oh, and about those people paying off a fine? We put them in prison today, says Anderson, and

… locking someone in prison is more inhumane than slavery. Prison destroys people’s lives.

That depends a lot of the kind of prison and the length of your term… but pretty much any jail sentence beats a lifetime of unpaid labor.

Anderson later explained that the Bible also says people who “steal a man and selleth him” should be put to death. See, everyone? The Bible opposes the slave trade!… Unless, of course, you’re taking that passage literally (which Anderson does). Because that would mean slave owners who always owned their slaves and never sold them would escape punishment.

Is the Bible just pro-slavery? No. But are there certain situations where God did indicate slavery or for people to beat their servants? Absolutely. Absolutely. Of course! But you know what? It’s all right. And I agree with all of it. Why? Because the Bible is God’s Word. That’s why.

Just to be clear, that means Anderson condones sexual slavery and beating slaves with rods (as long as the slaves don’t die as a result).

The Bible may say owners should treat their slaves justly, but it never outright condemns it because slavery was common practice at the time.

Rational people can simply admit the Bible was wrong on the topic. God should have explicitly said that slavery — any kind of slavery — was wrong. He didn’t. It took until relatively recently for our society to condemn the practice outright, and even now, the practice still occurs in other parts of the world.

Anderson, however, is not a rational person. He can’t even bring himself to condemn slavery because his holy book says it’s okay. That’s what can happen when you uncritically accept religious dogma.

February 24, 2016
The Duggars Are Returning to Television... Sort Of
Next Post