A couple of days ago, I posted about how Arkansas State Senator Jason Rapert, who had already proposed and passed a bill to install a Ten Commandments monument on the grounds of the State Capitol, was now trying to fundraise to build that monument.

He began a GoFundMe campaign to crowdsource funding on behalf of a private company, the American History & Heritage Foundation, Inc., a group that seems to have been created for the sole purpose of putting up this monument.

Yesterday, however, the American Humanist Association’s Appignani Humanist Legal Center denounced Rapert’s fundraising scheme in a letter sent to his office, explaining how his proposed monument would very likely violate the law and lose a legal challenge:

… The Appignani Humanist Legal Center cites Sen. Rapert’s leadership in the Appeal to Heaven legislative caucus, a national network of conservative Christian elected officials who openly profess their commitment to governing based on biblical principles.

“Many people in Arkansas have already expressed concern about the Ten Commandments monument and its excessive state entanglement with religion,” said David Niose, legal director of the American Humanist Association. “We urge Sen. Rapert to stop this project and turn his attention to the practical, real-world needs of all of his constituents, both religious and nonreligious.”

The letter warns that Sen. Rapert should cease his fundraising activities for the Ten Commandments monument or risk likely litigation that will result in an unnecessary waste of taxpayer money.

How did Rapert respond?

By turning on a video camera, ripping the letter up, and posting it on Facebook. Because he has the emotional maturity of a 12-year-old. 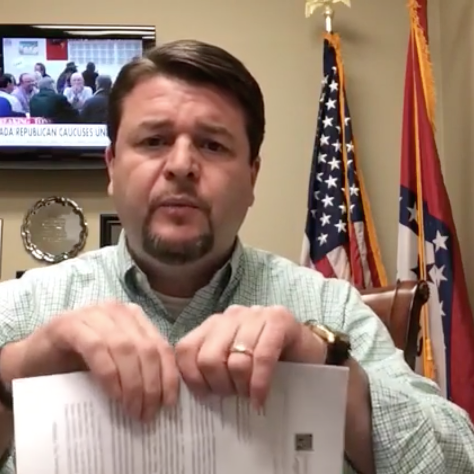 Here’s the entire video in a nutshell: Rapert doesn’t give a shit about his constituents. He’s interested in promoting Christianity. And if you criticize him, it only makes him that much more of a martyr. So what if he loses a legal challenge and wastes the taxpayers’ money? Jesus will appreciate it.