The New President of the British Humanist Association Talks About Being an Asian Atheist February 23, 2016 Hemant Mehta

Writing for New Humanist, Ariane Sherine has an enlightening interview with Shappi Khorsandi, the new President of the British Humanist Association: 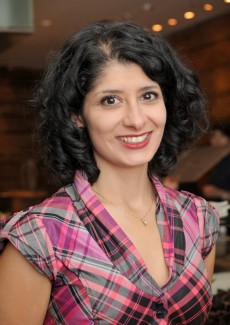 Has she found, as I have, that being a woman of colour makes people less willing to accept that she’s atheist? “I find that when you are Asian and you say you don’t have a religion, people assume that you have had a battle with your parents. ‘Do you talk to your parents? How do they feel about you doing stand-up? How do they feel about you eating pork?’ It’s an assumption made on a people based on the colour of their skin, not giving credit for their education or values or own personal evaluation of life. You’re assuming my parents don’t have any sort of critical thought process by assuming that I’ve had to work against them. It’s not the case with my family at all.”

I’ve definitely had that reaction before… (My parents and I are very close, for what it’s worth.)

Khorsandi says one of her main goals is to see “humanist marriage ceremonies legalised,” so that Humanist celebrants have the same legal authority as religious ones.

The Iranian-born comedian succeeds former President Jim Al-Khalili. She is the “twelfth President in the BHA’s history, and the fourth woman to take the role,” according to the group’s website.

February 23, 2016
Christian Pseudo-Historian David Barton Can't Decide Whether or Not He Has a Ph.D.
Next Post