Pope Francis pissed off no small amount of people last week when he appeared to critique Donald Trump‘s wall proposal as being not particularly Christian. Conservative politicians across the board rebuked the religious leader, but some were more intense than others. 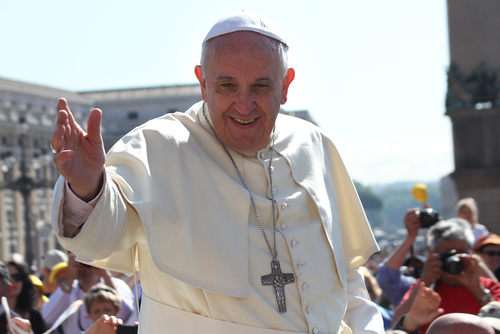 Take, for instance, New Hampshire State Rep. Susan DeLemus. A Republican and avid Trump supporter, DeLemus had shared snippets of scripture on Facebook. When someone else brought up the recent comments from the Pope, her now-deleted response was definitive:

The Pope is the anti-Christ. Do your research.

Now, I’m no fan of the guy or his Church, nor do I believe there’s some ominous Anti-Christ waiting to be born or grow up and reign hell upon the earth, but DeLemus’ statement is fifty shades of absurd. Politico later reached out to her to see if she wanted to clarify her comment. She doubled down, saying:

I was actually referencing the papacy. And what I wrote after that ‘do your research,’ if you read the Geneva Bible, which is the Bible I use when we study, the commentary is — actually by the founders of the United States actually, the Protestant Church — their commentary references the papacy as the anti-Christ.

Confused? Well, you should be, because even explanations of what she’s rambling about are confusing. The Geneva Bible is regarded as a precursor to the more commonly used King James Version, and it takes things further than that abominable text on a number of issues. One of those is the papacy:

(8) And they have a king over them, which is the (*) Angel of the bottomless
pit, whose name in Hebrew is (♣) Abaddon, and in Greek he is named (♠)
Apollyon.

(8) The order of powers of maliciousness; that they are subject to one infernal king, whom thou mayest call in English, The Destroyer; who driveth the whole world both Jews and Gentiles into the destruction that belongeth unto himself. I cannot tell whether this name belongeth unto the Etymological interpretation of Hildebrand, by a figure often used in the holy Scripture, which albeit it may otherwise be turned of the Germans (as the sense of compound words is commonly ambiguous) yet in very deed it signifieth as much as if thou shouldest call him the firebrand, that is, he that setteth on fire those that be faithful unto him.

(*) Which is Antichrist the Pope, king of hypocrites and Satan’s ambassador.

(♣) That is, destroyer; for Antichrist the son of perdition destroyeth men’s souls with false doctrine, and the whole world with fire and sword.

So there you have it. According to DeLemus and a fire-and-brimstone collection of ancient texts, the Pope is Satan’s ambassador. Talk about fanciful poppycock.

If this particular brand of lunacy sounds familiar, that might be because this is not DeLemus’ first brush with public ranting and raving. Earlier this year, she came across as hysterical and deranged in a CNN interview about President Obama. She’s also an avowed birther who fought to keep the President off the ballot.

It doesn’t end there. Her husband Jerry Delemus might also be familiar to you. Why? Because he just got back from a nice little vacation in Nevada. As Miscellany Blue reports:

Three weeks ago, Jerry DeLemus grabbed his Gadsden flag and raced to Bunkerville, Nevada to support the cattle rancher in his confrontation with federal officials. When he arrived, the former Marine sergeant was appointed commander of the growing armed militia and was featured in numerous news reports and videos.

What is the other half of the DeLemus marriage up to now? Running for sheriff, obviously. Because who better to preserve the rule of law than a man who spends his days breaking it? Besides, it might put him in a better spot to take Obama to task for his quite obvious treason.

In any case, it’s unlikely either of them are going to fade into the political background. Their track record of foolishness hasn’t hurt them yet, and in today’s political climate, as we well know, anything goes… even, it seems, calling the Pope the Anti-Christ.

February 23, 2016
Marco Rubio's Prostitution Comments Could Come Back to Haunt Him
Next Post

February 23, 2016 Christian Pseudo-Historian David Barton Can't Decide Whether or Not He Has a Ph.D.
Browse Our Archives
What Are Your Thoughts?leave a comment