There’s a widespread belief that Ohio Governor John Kasich is the “moderate” in the Republican race, at least when compared to the likes of Ted Cruz and Marco Rubio, who can’t seem to get far enough to the right.

Samantha Bee shows how Kasich isn’t a moderate at all — not on LGBT issues and certainly not on abortion rights: 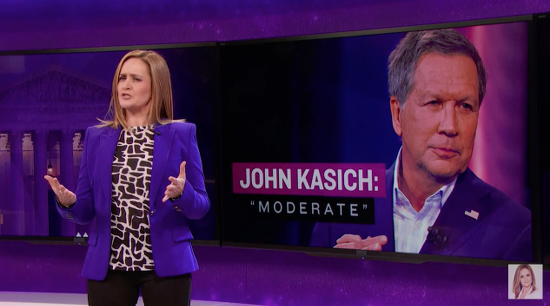 Just another reminder that there’s no Republican worth voting for in this race. The best we can hope for is a candidate so awful that he implodes in the general election, handing an easy victory to the Democrat and flipping the Senate in the process.

February 23, 2016
South Carolina Legislators Propose Bill to Put "In God We Trust" Sign in Every Public School
Next Post

February 23, 2016 The American Family Association Has Quietly Removed the "Bigotry Map" from Its Website
Browse Our Archives
What Are Your Thoughts?leave a comment