Christian Pseudo-Historian David Barton Can’t Decide Whether or Not He Has a Ph.D. February 23, 2016 Hemant Mehta

Christian Pseudo-Historian David Barton Can’t Decide Whether or Not He Has a Ph.D.

Does Christian pseudo-historian David Barton have a Ph.D.?

If you look at his biography, it simply says he has an “Honorary Doctorate of Letters from Pensacola Christian College,” but anyone could tell you that’s not at all the equivalent of a Ph.D. It’s an award, nothing more. Barton didn’t earn the doctorate.

Barton’s only real degree is a bachelor’s in Christian education from Oral Roberts University.

But he was very confused on TheDove TV’s “Focus Today” show last week when he admitted he didn’t have a Ph.D. before immediately contradicting himself and saying he did. 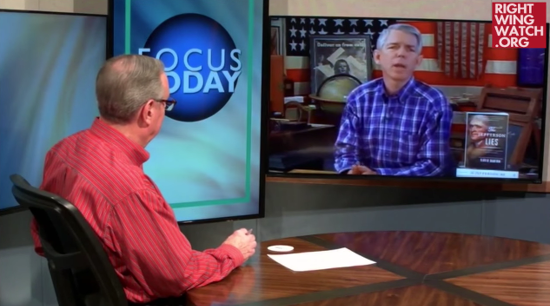 This isn’t some mistake you’re allowed to be wishy-washy about. If you earned a Ph.D., you would know it. You know the sacrifice it took and the time you spent studying and researching to earn it.

Barton didn’t do any of that. (And it shows in his shoddy work.) And yet he claims to have a Ph.D.? Even if he’s confusing it with the Honorary Doctorate, it wouldn’t suggest he has any more credibility. Getting an Honorary Doctorate from Pensacola Christian College is like Ted Cruz getting an endorsement from George Pataki. It might be meaningful to about a dozen people. Everyone else knows it’s worthless.

It’s just another example of a David Barton lie.