Marco Rubio Didn’t Say There Are “Not Many Answers” in the Bible, but He Would Have Been Right February 22, 2016 Hemant Mehta

Marco Rubio Didn’t Say There Are “Not Many Answers” in the Bible, but He Would Have Been Right

As the story went, Rubio came across a (Cruz) campaign worker holding a Bible and said there were “not many answers” in it. The truth, as you can see the video below, was that Rubio said the Bible has “all the answers.” 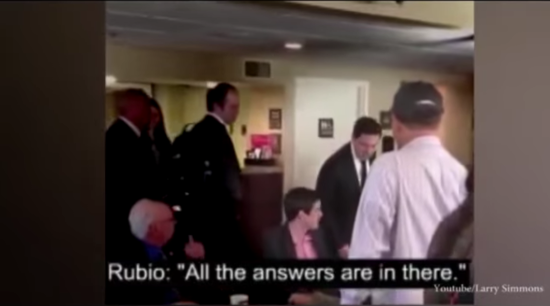 It makes sense for Rubio to praise the Bible since he and Cruz are both battling for the support of evangelical Christian voters. Plus, it would have been pretty idiotic to slam the Bible in front of both a Cruz campaign staffer and Cruz’s radical preacher father.

But it’s too bad he didn’t say the Bible contains “not many” answers, because he would have been right.

Christians love to say the Bible has all the answers, but every “answer” seems to have an equal and opposite rebuttal.

Love your neighbor? I can find you passages that say we should put gay people to death.

Blessed are the poor? Not according to all those prosperity gospel preachers who quote the Bible to defend their wealth.

You’re also not going to find much quality science in there. Or history. Or math.

If you find anything of value in the Bible, it’s usually because of what you bring to it, not what you’re taking from it.

So Phantom Rubio was right. The Bible doesn’t have very many answers.

Unfortunately, Actual Rubio is the guy who’s running for office and he thinks the Bible has all the answers.

Leave it to Ted Cruz to fire someone on his staff for posting a religious message I could have been on board with.

February 22, 2016
A Passenger Nearly Died in a Car Explosion, but Don't Worry! His Bible Escaped Without a Scratch
Next Post