Last November, Georgia Lt. Gov. Casey Cagle threw atheists under the bus with a fundraising letter stamped with the line, “Don’t Let Atheists Ban Georgia’s Football Chaplains.” He was referring to Freedom From Religion Foundation’s campaign calling out public universities that have Christian chaplains (some of whom are paid) preaching to the football team. In other words, his letter was basically saying, “Let the state promote Christianity through public university football teams.”

The state Senate just passed SB 309, which allows athletes at public schools to put religious symbols on their uniforms. It’s a ridiculous bill which would inevitably result in Christian students turning a team sport into a game of one-upmanship over who publicly loves Jesus the most.

It’s no surprise, then, that Cagle loves it. He wrote this on his Facebook page a few days ago: 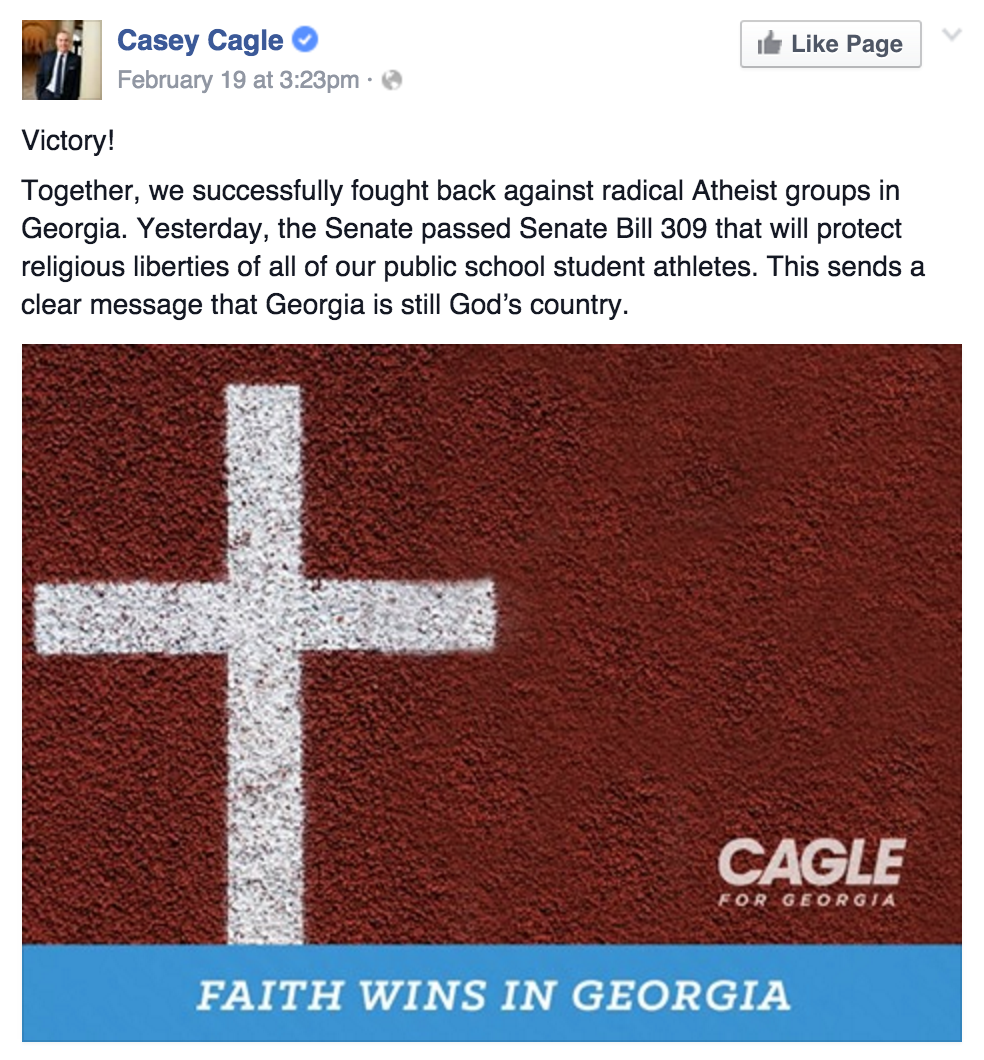 Together, we successfully fought back against radical Atheist groups in Georgia. Yesterday, the Senate passed Senate Bill 309 that will protect religious liberties of all of our public school student athletes. This sends a clear message that Georgia is still God’s country.

“Radical Atheist groups” is his way of saying “groups that care about church/state separation.” And “God’s country” really means his God’s country.

In theory, this bill would also allow students to write “Hail Satan,” “Jews are going to Hell,” or “Praise ISIS” on their uniforms. Which may be what students need to do in order to get politicians to realize how big of a mistake this would be.

It’s not like anyone was stopping student athletes from praying on their own before, during, or after games. The Republicans in the Senate who passed this bill on a party line vote are trying to solve a problem that exists only in their mind.

The question now is whether the Republican-dominated House or Republican Governor have the courage to oppose this unnecessary bill.

February 22, 2016
Get Ready for the David Barton School Of Political Science
Next Post

February 22, 2016 An Arkansas State Senator is Trying to Crowdsource Funding for a Ten Commandments Monument
Browse Our Archives
What Are Your Thoughts?leave a comment