Louisiana Police Chief Does “Research” on Critics Who Dislike His “In God We Trust” Initiative February 20, 2016 Hemant Mehta

A couple of days ago, Chief Tim Lentz of the Covington Police Department (in Louisiana) wrote on Facebook about his decision to put “In God We Trust” stickers on all the vehicles. 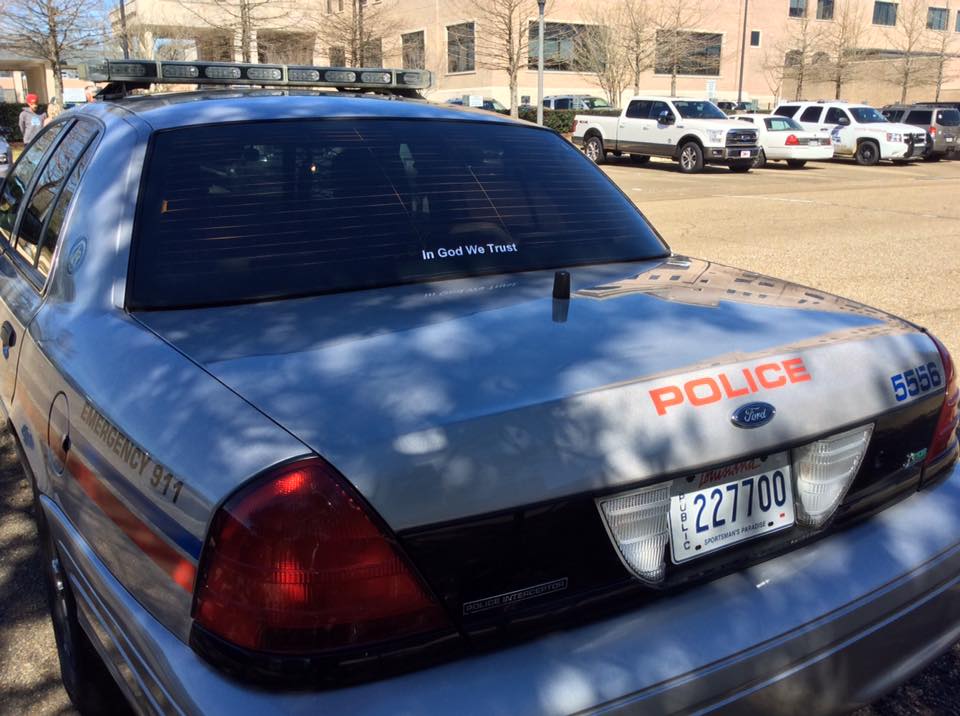 As I was sitting in church last week, I said a prayer for the safety of all of my officers, and officers across the country. While in church, I recalled a movement sweeping across the country with different law enforcement agencies, where they place a decal on the back of their police cars with the motto “In God We Trust”. So when I got back to the Office, I did a little research and learned that in 1956 President Eisenhower signed into law a bill that declared “In God We Trust” a national motto. The phrase then appeared on our coinage, where it still resides today. I also found an Attorney General’s opinion out of Texas where Attorney General Patton (11/4/15) opined “Displaying “In God We Trust” on police vehicles is a passive use of a motto steeped in our nation’s history that does not coerce citizen approval or participation”. I would surmise that if an opinion was sought from our Louisiana Attorney General he would declare the same.

Over the next couple of days, I sought the opinion of people whom I have tremendous respect for, religious leaders, and officers. Each, without fail, expressed their overwhelming support. I was touched when one of my officers said it succinctly, “Chief, I pray when I go to work every day”.

As regular readers know by now, this is something that courts have found legal, though it still sends the message that non-religious citizens aren’t going to get a fair shake in Covington.

But here’s where things get really weird…

As you might expect, there was a lot of criticism on Facebook to Lentz’s post. Here’s just a sampling of some of the most popular responses that opposed what he was doing: 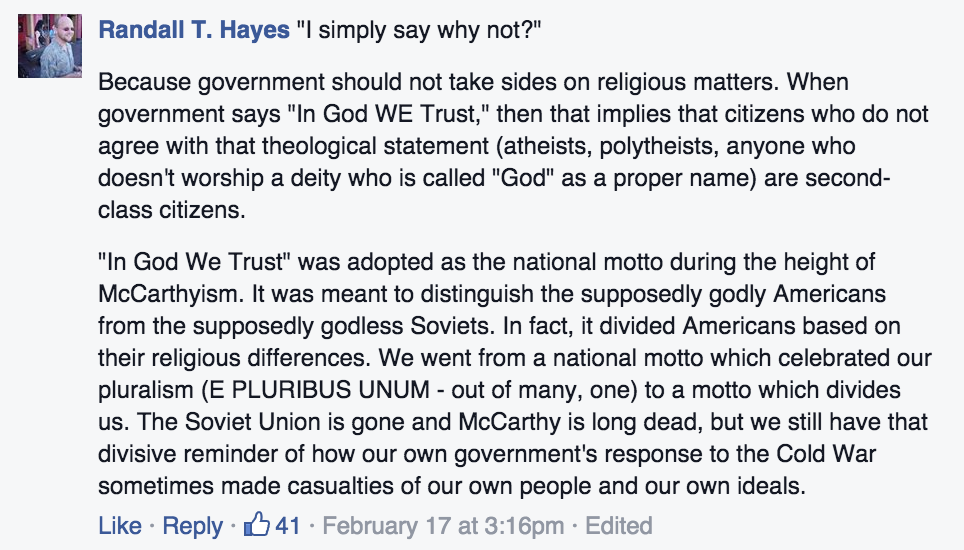 Those are sensible reactions, right?

Not if you’re Lentz.

Check out what he told the Times-Picayune:

“The response I’ve received has been overwhelmingly positive,” Lentz said. “Several trolls on social media had negative things to say. We did research on them, and many were from other parts of the country.”

First of all, who knew that if you don’t live in Lentz’s community, reasonable critics are automatically considered trolls?

And second, he’s doing research on them? What the hell?! This guy is treating his critics like he should be treating criminals — all because their opinions happen to be different from his own. Even if that “research” involved nothing more than clicking on a profile to see their Facebook page, it’s a ridiculous step for a government official to take. Dare I ask what would’ve happened if those critics lived in Covington?

I had no idea thin skin was a prerequisite to becoming police chief.

February 20, 2016
Conservatives Are Forgetting What Jesus Said in Their Criticism of Pope Francis' Wall Comments
Next Post

February 20, 2016 "Scientist" Claims the Bible Is Compatible With Science
Browse Our Archives
What Are Your Thoughts?leave a comment