In a bizarre 13-minute speech yesterday on behalf of Ted Cruz, Duck Dynasty‘s Phil Robertson gave a sermon that invoked pretty much every buzzword of the Religious Right: 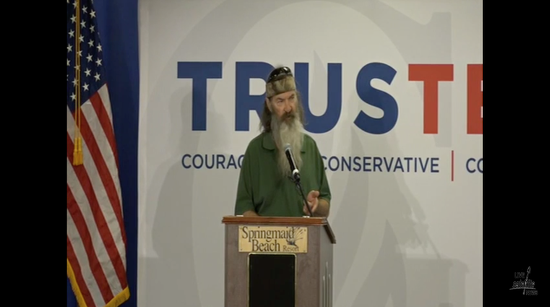 Pounding on the lectern while holding a Bible aloft as he yelled at the crowd, reality star Phil Robertson promised that America is doomed despite the fact that the Ten Commandments are on display in the “Supreme Court room.”

“Give them time. They’ll haul them away,” he warned before ticking off each commandment and pointing out that he believes they under-gird the American jurisprudence because this is a “Christian nation.”

During the 13-minute speech he barely mentioned the candidate before leaving the crowd with his final words: “Vote godly.”

Vote godly. Let’s hope that means you shouldn’t bother showing up at the ballot box.

Can you imagine what would happen if a non-Christian with a long beard gave a speech saying the government should follow his religious principles? There would be chaos. But not in Ted Cruz’s world, where theocracy is a selling point.

February 20, 2016 Senator Joni Ernst Won't Denounce Faith-Based Discrimination, in Response to Atheist Questioner
Browse Our Archives
What Are Your Thoughts?leave a comment