When it comes to taking rights away from other people, nothing is more important to conservatives that meeting biblical demands (or at least those demands they attribute to the Bible). Oddly enough, that paramount importance is lost when following biblical principles would interfere with enacting conservative policy. And conservatives go to great lengths to explain away or ignore those parts of the Bible.

“A person who thinks only about building walls, wherever they may be, and not building bridges, is not Christian,” Francis said when a reporter asked him about Mr. Trump on the papal airliner as he returned to Rome after his six-day visit to Mexico.

This has since prompted a flurry of responses from conservatives — including the following, from (Catholic) Sean Hannity: 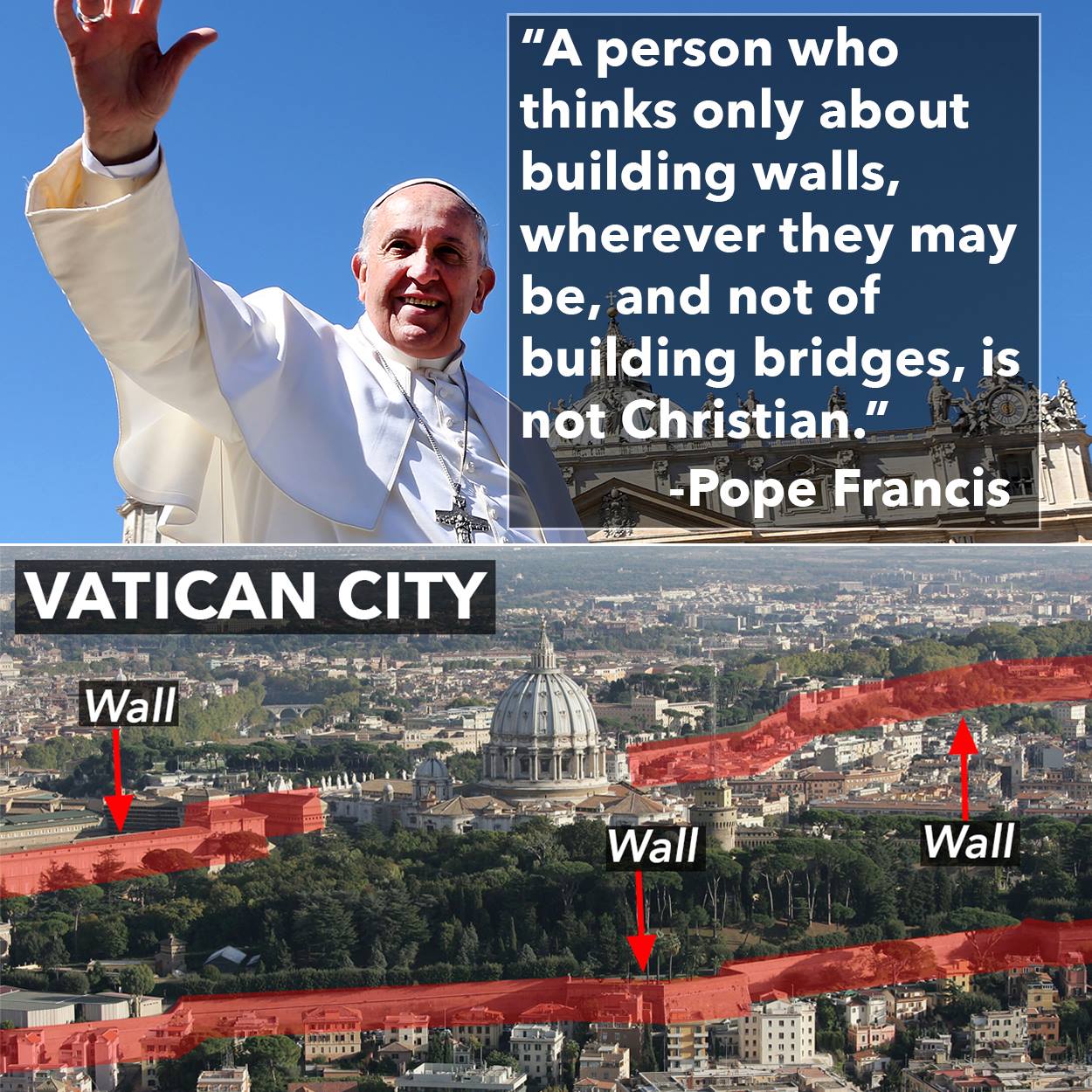 Some Catholic scholars have objected to the comparisons on historical and geographical grounds. For myself, the biggest flaw with this reasoning is that the pontiff was not issuing a blanket condemnation of walls, but of people who prefer walls to bridges. “But walls exist” misses the point entirely.

But I’m not convinced that missing the point isn’t the point of these objections. Anti-immigrant sentiment is huge among the current crop of conservatives, and they are certainly intent on putting up and maintaining walls — both of the us/them mentality which says Hispanic immigrants are rapists and ne’er-do-wells, and of the physical kind like the ridiculous border wall endorsed by Trump. So a religious objection to wall-building, of either kind, would come in direct conflict with the goals of this supposedly devoted religious party.

In an article that is a true masterpiece of missing the point, conservative columnist Ben Shapiro first notes that he does not believe the Pope’s comments were figurative:

Francis’ defenders claimed that Francis was speaking figuratively, but that’s highly unlikely; the day before, he campaigned for open borders from Ciudad Juarez, and the question that prompted this response explicitly cited Donald Trump.

Which is an odd position to take, unless he believes that Francis truly feels that facilitating water crossings (building bridges) is a religious obligation for Christians. Otherwise, I think we must acknowledge at least some element of figurative language here. While the wall Trump promises to build will be physical, it is preceded by and would only strengthen the figurative walls he and other demagogues have erected; and, like the bridges, the walls Pope Francis references are not and cannot solely be of the physical variety. (Not least of all as his words reflect New Testament language — but more on that in a bit).

From here, Shapiro moves on to the Vatican-has-walls-too line. But his worst arguments are reserved for when he moves to the Bible.

Then there’s the Bible. As I’m no Christian, I’ll leave the New Testament to those better versed. I will note, however, that the Old Testament — the Tanach — is replete with references to the usefulness of walls.

He sums all of this up with:

Needless to say, God doesn’t seem particularly perturbed by the idea of walls in the Bible. They’re necessary for defense, and they’re often necessary to draw boundaries between people who live by the Living Word, and people who do not.

Suffice it to say, the Pope’s Biblical exegesis here seems rather weak.

There are three major problems here. The first is that Shapiro is focusing solely on physical walls, when the Pope’s intent seems to have been more than that. The second is that, like Hannity and others, he is ignoring the fact that Pope Francis did not actually say that building walls was un-Christian; he said that only building walls, and not bridges, was un-Christian. Those are two vastly different statements; Shapiro chooses to combat a straw man version of the Pope’s words, rather than contest what he actually said. Finally, and most understandably, his comment about drawing boundaries between believers and nonbelievers is directly at odds with the New Testament. (I say most understandably because, as Shapiro notes, he is not a Christian, so presumably he does not know that.)

But the New Testament is pretty clear: Jesus was supposed to be the ultimate wall breaker, the ultimate bridge builder that united Jew and Gentile. Ephesians 2:14 reads:

For he himself is our peace, who has made the two groups one and has destroyed the barrier, the dividing wall of hostility, by setting aside in his flesh the law with its commands and regulations. His purpose was to create in himself one new humanity out of the two, thus making peace, and in one body to reconcile both of them to God through the cross, by which he put to death their hostility. He came and preached peace to you who were far away and peace to those who were near. For through him we both have access to the Father by one Spirit.

Consequently, you are no longer foreigners and strangers, but fellow citizens with God’s people and also members of his household, built on the foundation of the apostles and prophets, with Christ Jesus himself as the chief cornerstone. In him the whole building is joined together and rises to become a holy temple in the Lord. And in him you too are being built together to become a dwelling in which God lives by his Spirit.

The Pope’s language of building bridges and tearing down walls is very similar to what is essentially the Bible’s stated purpose for Jesus’ birth: the uniting of humanity.

So, yes, ancient warfare had plenty of use for walls. But to apply wartime defenses to peacetime immigration policy is absurd. To pretend that the Pope was speaking merely of physical constructs is disingenuous. And to argue that the God of the Bible is okay with drawing boundaries between people anymore is to ignore what the New Testament actually says. While that’s one thing for Ben Shapiro, it’s less easily excused for his Christian readers. And considerably less so for Mike Huckabee, who made similar comments on Fox News Channel the other day.

Not that, at this point, we should be surprised. After all, the Bible only seems to matter to conservatives when it can be pressed into service. And, like the Constitution, when it runs contrary to their political designs, it gets ignored.

February 20, 2016
Researcher Finds That the Old and New Testament Are Both More Violent Than the Qur'an
Next Post