Whatever it may mean in other parts of the world, or might have meant in other eras, Christian persecution in the United States today stands for one thing: That abhorrent concept that laws apply to Christians, too.

Luckily, there are stalwart champions of justice and freedom who are eager to rescue their fellow religionists from odious impediments like equality. 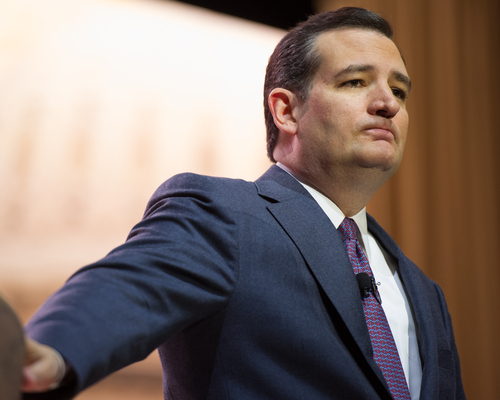 And I will note that much of this persecution is the fruits of the Supreme Court’s disastrous gay marriage ruling last year.

Naturally, Cruz promises to end the nasty scourge of Christians playing by the same rules as everyone else.

And if that doesn’t work, he’ll just throw out the rulebook.

Cruz declared that it was “very sad” that some of his rivals for the GOP presidential nomination called the Obergefell ruling “settled law,” which is, he said, why anti-gay leaders have flocked to endorse him.

“I believe that decision was fundamentally illegitimate, it was lawless, it was unconstitutional and it will not stand,” he said. “And I would note, that is precisely why Dr. James Dobson has endorsed me in this campaign, it is why Tony Perkins of the Family Research Council has endorsed me in this campaign, it’s why the National Organization on Marriage [sic] has endorsed me on this campaign and has said it cannot support Donald Trump or Marco Rubio because if we’re not willing to defend marriage, we are giving up the foundational building blocks of the family, we’re giving up the Judeo-Christian values that built this great nation.”

Like the term “persecution,” Cruz uses “defend” in a fashion that is at odds with the actual meaning of the word. Marriage doesn’t need defending because it isn’t under attack, just like equal protection under the law doesn’t amount to persecution.

A candidate who doesn’t understand those concepts would make a disastrous President.

February 19, 2016
Lawrence Krauss: Let's Put an Atheist on the Supreme Court
Next Post

February 19, 2016 Legislation to Protect LGBT Hate Crime Victims May Fail in Utah Due to Mormon Church Opposition
Browse Our Archives
What Are Your Thoughts?leave a comment