If you were to attend a meeting of the Chino Valley Unified School District Board of Education (in California), you’d think you were at a church service. The members frequently lead explicitly Christian prayers and read Bible verses:

In late 2014, the Freedom From Religion Foundation filed a federal lawsuit against the district on behalf of a student, two parents, and a District employee:

The issue here was that there were board members who didn’t know the difference between church and state. They saw school board meetings as an extension of the pulpit, where everyone in the room was just a target for proselytization no matter the age.

Unbelievably, things got only worse after that.

At a meeting shortly after the lawsuit was filed, the Board of Education voted 3-2 in favor of finding an attorney to “defend the board without pay” against the legal challenge, clearly not realizing that while Christian legal groups won’t charge them for their services, the District would be on the hook for FFRF’s legal fees when they lost.

I have no idea what that was supposed to mean… it was basically a word salad made of right-wing talking points.

Cruz didn’t stop there. In mid-2015, he went on another rant trashing gay marriage, invoking the Confederate Flag, arguing that racism is over, and complaining about California’s recent mandatory vaccination laws. 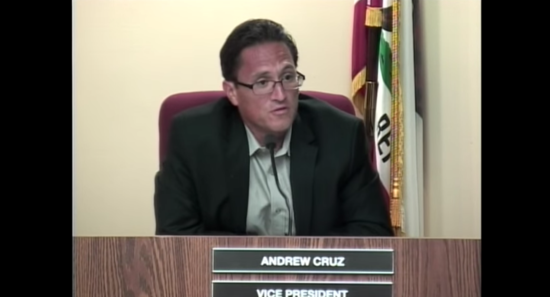 (I didn’t alter Cruz’s grammar in the excerpts below.)

It is stated upon our foundation and sealed in our hearts that a union between one man and one woman, to the exclusion of all others so that children may know and may be raised by their biological parents, we should now be [unintelligible] vigilant for our freedoms may be in jeopardy…

Children are not commodities that can be [unintelligible] severed from their natural parentage and traded between unrelated adults. Parenting will be defined, erasing and replacing with gender-neutral legal parent, erasing biological, natural parenthood that states will ignore.

[Through the government,] expect thoughts to be controlled by limiting words. Gender-neutral language will become legally mandated. It will be discriminatory to assume a human being is male or female or heterosexual…

It is quite strange when you have nine innocent worshipers in Charleston being murdered, and discussion turns around to the Confederate Flag… Today, South Carolina governor is a woman from India. Of Indian descent. One of two senators is black. You know, we’re no longer a racist country…

It is bizarre how our government harm our citizens by allowing infectious diseases to infect our country and blaming mothers who don’t vaccinate their children.

It’s hard to address all the idiotic things he said because there was so much of it. (Needless to say, just because people in South Carolina has some prominent politicians of color doesn’t mean racism is over. Not by a long shot.)

But here’s a more important question: How the hell does any of this help students in the District?

The School Board had become an outlet for Cruz and his church buddies (who outnumbered the other Board members) to promote their personal politics rather than do any meaningful work on behalf of the kids.

Here’s the good news: All of this may finally be coming to an end.

Yesterday, a U.S. District Court Judge ruled that the prayers were unconstitutional and ordered the School Board to put a stop to them immediately:

Judge Jesus G. Bernal of the U.S. District Court for the Central District of California ordered the board to immediately stop its school-sponsored prayers.

As a result of today’s court ruling, the Chino Valley Unified School District, which in the past has faced serious budget shortfalls, will be on the hook for tens of thousands of dollars in legal fees. [FFRF’s Andrew] Seidel estimates that the district will pay out more than $50,000.

Lisa Greathouse, whose children graduated from the school district, long questioned the board’s “promoting their religious agenda.” She said she’s not surprised by today’s decision but thinks “the money spent on legal fees could have been much better spent in the classroom.”

The school board meets tonight, but thanks to the judge’s ruling, it will not be allowed to open its meeting with a prayer for the first time in years.

If the Board members decide to pray anyway, the District will continue to siphon off money to the FFRF. It’s ultimately the job of the people in the community to elect responsible adults to the Board if they want this to end. The current Board members have already shown they can’t be trusted to do the right thing.