Jerry Falwell and the Moral Majority: A Brief History

We’ve seen marriage equality and the Affordable Care Act become realities over the past few years (despite multiple legal challenges to both), so why are liberals losing elections at the state and federal levels?

That’s the question Stephen Prothero seeks to answer in his new book Why Liberals Win the Culture Wars (Even When They Lose Elections) (HarperOne, 2016): 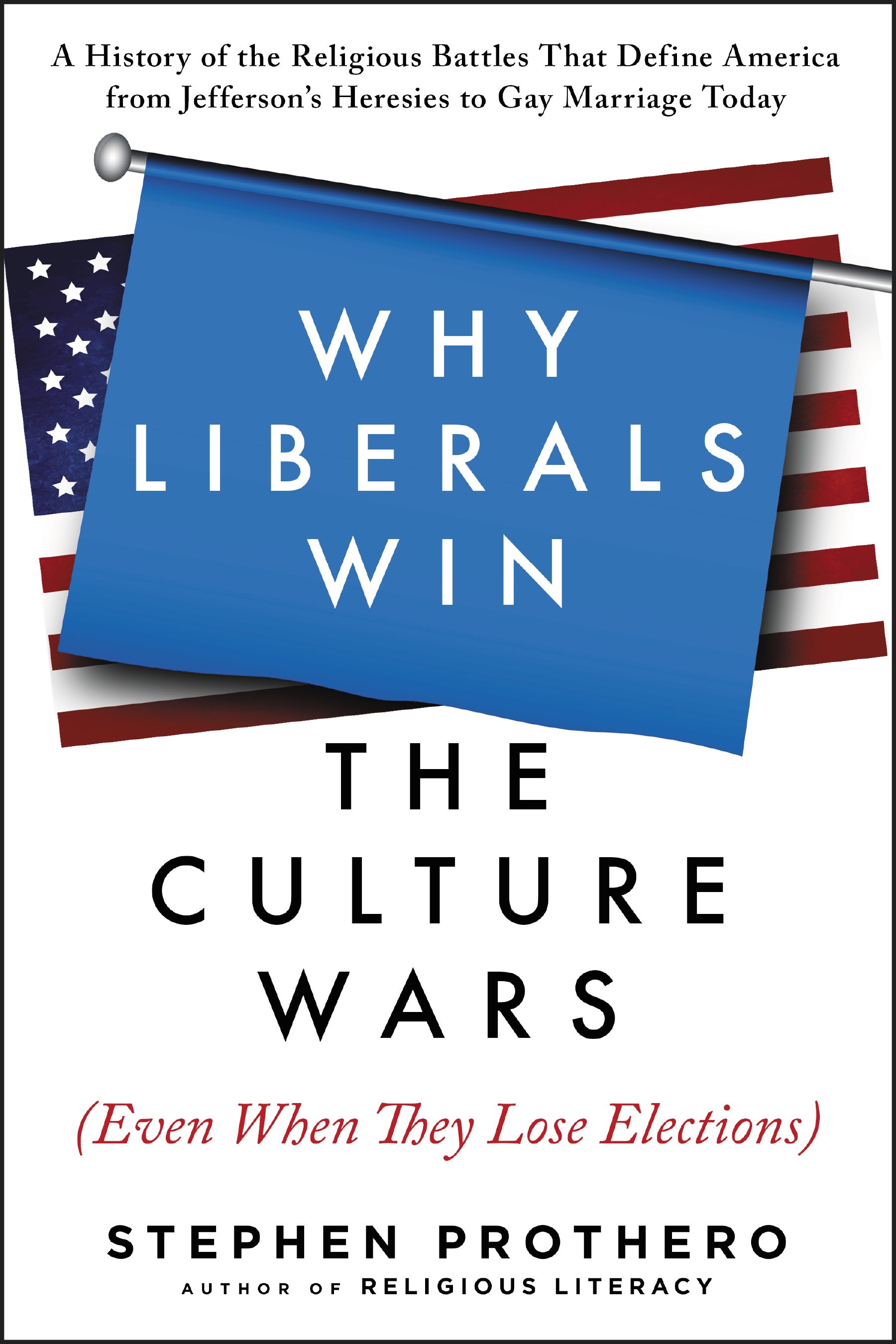 If you want to understand the culture wars, then you have to know the history of today’s Christian Right. In the excerpt below, Prothero describes the rise of the Moral Majority. It’s not just social issues like abortion that galvanized members. Segregation also played a role.

Back in 1965, in a sermon delivered the day Rev. Martin Luther King Jr. led civil rights marchers from Selma to Montgomery, Alabama, Jerry Falwell, a fundamentalist preacher at Thomas Road Baptist Church in Lynchburg, Virginia, and the host of The Old-Time Gospel Hour television program, suggested that King was a communist. He also criticized “left-wing” leaders of the “so-called freedom movement” for stirring up hatred and violence. “Preachers are not called to be politicians but to be soul winners,” Falwell said.

In 1976 — Newsweek‘s “The Year of the Evangelical” — Falwell seemed to be having a change of heart. In this bicentennial year, he organized I Love America rallies in 141 cities in an effort to bring “America Back to God.” On July 4, 1976, he told his followers that “this idea of ‘religion and politics don’t mix’ was invented by the devil to keep Christians from running their own country.” In 1977, he worked with actress Anita Bryant and her Save Our Children campaign to repeal a gay rights ordinance in Dade County, Florida. In 1978, he helped to defeat a Virginia referendum to legalize pari-mutuel betting. In 1979 in Lynchburg, he joined forces with Weyrich and others to form the Moral Majority — a “pro-life, pro-family, pro-moral, and pro-American” organization. So it was no surprise when in 1980 he repudiated as “false prophecy” his earlier stance against mixing religion and politics. “All the moral issues that matter today are in the political arena,” Falwell said. “There’s no way to fight these battles except in that arena.”

In addition to saving individual souls, Falwell was now committed to saving the soul of the nation, stopping “the growing tide of permissiveness and moral decay” from “crushing our society.” But Falwell was not just beckoning America “back to biblical morality” and “back to patriotism.” He was urging its citizens both to oppose the SALT II treaty, teachers unions, and the Occupational Safety and Health Administration, and to support capitalism, Israel, nuclear weapons, a balanced budget amendment, tax cuts, and massive increases in military spending. “The free-enterprise system is clearly outlined in the Book of Proverbs of the Bible,” he said.

The marriage Falwell officiated between religious and political conservatives worked because he and his flock came to see big government as morally wrong. The federal government was not just telling him how to run his schools and his family. It was using its coercive power to spread secular humanism. So members of the Moral Majority did not stop at agitating for “family values.” They also agitated for limited government. When Reagan said “government is not the solution to our problem; government is the problem,” they said “Amen,” and when Pat Robertson called government “public enemy number one,” they joined in the chorus.

Falwell was not the only conservative Christian to convert in the Carter years to the gospel of conservative political activism. In 1977, psychologist James Dobson founded Focus on the Family and Donald Wildmon founded the American Family Association. Two years later, Beverly LaHaye formed Concerned Women for America with the goal of “reversing the decline in moral values in our nation” and televangelist James Robison organized the Religious Roundtable. On August 22, 1980, Robison delivered a rousing wake-up call in front of fifteen thousand enthusiastic evangelicals at a Dallas rally for Reagan. “I’m sick and tired of hearing about all of the radicals and the perverts and the liberals and the leftists and the Communists coming out of the closet,” he said. “It’s time for God’s people to come out of the closet.” At this same rally, Reagan offered his famous endorsement of the Religious Right: “I know you can’t endorse me. But I want you to know that I endorse you.”

Many of these leaders were inspired by the popular books, lectures, and films of the goateed evangelical theologian Francis Schaeffer. Schaeffer, who opposed on biblical grounds the “non-compassionate use of accumulated wealth,” was to the left of the Moral Majority on many economic and environmental issues. But his argument that the God of the Bible called Christians to involve themselves in every aspect of human life influenced many born-again Christians to pop their spiritual bubbles and get into politics. “If it hadn’t been for Francis Schaeffer, I would have been a pastor in Lynchburg, Virginia, but otherwise never heard of,” Falwell said. “He was the one who pushed me out of the ring and told me to put on the gloves.”

As they looked back on the birth of the Religious Right and told their own creation stories, other evangelical leaders credited Schaeffer. But more often they pointed to Roe v. Wade. According to this “abortion myth,” as historian Randall Balmer calls it, the leaders of the Religious Right portrayed themselves as “new abolitionists” fighting for the unborn just as abolitionists had fought against slavery. Ed Dobson, a founding member of the Moral Majority, put it in these terms: their focus was on the family. This is a good story, but it is not how it happened. Falwell did not preach his first anti-abortion sermon until 1978, and the Southern Baptist Convention did not oppose abortion until 1980.

“The Religious New Right did not start because of a concern about abortion,” says Dobson. “I sat in the non-smoke-filled back room with the Moral Majority, and I frankly do not remember abortion ever being mentioned as a reason why we ought to do something.” Weyrich’s recollection is similar:

What galvanized the Christian community was not abortion, school prayer, or the ERA… I am living witness to that because I was trying to get those people interested in those issues and I utterly failed. What changed their mind was Jimmy Carter’s intervention against the Christian schools, trying to deny them tax-exempt status on the basis of so-called de facto segregation.

The IRS rule “kicked the sleeping dog,” says conservative icon Richard Viguerie. “It was the spark that ignited the religious right’s involvement in real politics.”

Since the early 1960s Weyrich (a Catholic) had tried to bring white evangelicals and political conservatives together in order to raise money and stir up votes on such issues as school prayer, abortion, and pornography. But well into the 1970s he was like the man in the New Testament parable casting seed upon rocky ground. The IRS’s Kurtz, who according to the Moral Majority’s executive director did “more to bring Christians together than any man since the Apostle Paul,” unwittingly replenished that soil, in no small part because so many in the Religious Right were tied so closely to “white flight” academies.

In Lynchburg in 1967, the same year public schools were finally desegregated in Virginia, Falwell had established a private school called Lynchburg Christian Academy. At its opening it had zero black students, the same number of black members at Falwell’s massive Thomas Road Baptist Church. Although he would later repent of his segregationism (and admit blacks to his school and his church), Falwell was at the time a white supremacist.

Why Liberals Win the Culture Wars (Even When They Lose Elections) is now available online and in bookstores.

Excerpted from Why Liberals Win the Culture Wars (Even When They Lose Elections) by Stephen Prothero.

Copyright © 2016 by Stephen Prothero. Published by HarperOne, an imprint of HarperCollins Publishers.

February 20, 2016 God of the Gaps: The Music Video
Browse Our Archives
What Are Your Thoughts?leave a comment