Much has been said about the implications of Justice Antonin Scalia’s death last week. Conservatives in particular have been devoting a lot of breath, ink, and airtime to the various facets of his passing — from blind obstructionism to prevent a replacement before the next POTUS takes office, to hand-wringing that liberals were not appropriately grieved, from promoting conspiracy theories under the guise of just-asking-questions about Scalia’s death to outright stating President Obama had him killed in a pagan ritual. It’s downright nutty how far they’re taking this.

And then along comes Glenn Beck, to argue that Scalia’s death was more or less a gift from God.

Not because he hates Scalia, but because he loves Ted Cruz so very much. (Happy belated Valentine’s Day, Senator?)

Beck was discussing with co-host Pat Gray God’s plan in letting Justice Scalia die. Noting that he didn’t want to speak for God, he proceeded to do exactly that, as he provided the answer from on High to a hypothetical sarcastic “thanks” for Scalia’s death: “You’re welcome.” 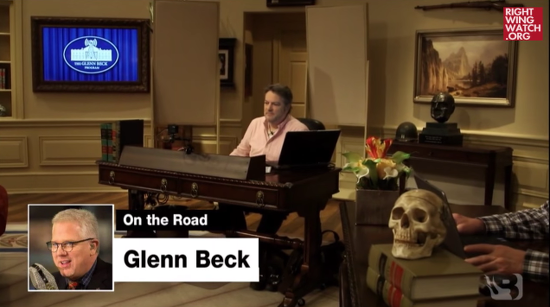 I just woke the American people up. I took them out of the game show moment and woke enough of them up to say, look at how close your liberty is to being lost. You now have lost your liberty. You replace one guy and you now have 5-4 decisions in the other direction. Just with this one guy, you’ve lost your liberty so you’d better elect somebody that is going to be somebody on [the court] because for the next 30 years, if you don’t, the Constitution as you know it [is gone].

The Constitution is hanging by a thread. That thread has just been cut and the only way that we survive now is if we have a true constitutionalist.

It’s no secret who that “somebody” is, since Beck has already and enthusiastically endorsed Cruz.

While it obviously sucks for Scalia that he happened to be God’s chosen vessel to make a point about Election 2016, I’m not sure it’s that much better news for Cruz. I mean, having God on your side is one thing… but having a supporter willing to kill to get you elected? Yikes. That’s taking things well past the creepy level, Lord.

Maybe settle for flowers instead next time?

February 19, 2016
Legislation to Protect LGBT Hate Crime Victims May Fail in Utah Due to Mormon Church Opposition
Next Post