In the world of comic books and superhero movies, there are always important new controversies to be found. Why did Superman lose the red underwear in Man of Steel? What minion of darkness decided to cast Ben Affleck as Batman? And now, thanks to anti-abortion site Life Site News, we have a truly crucial one: How will our culture survive if the “roles of male and female in the sexual act literally get turned around” on-screen? 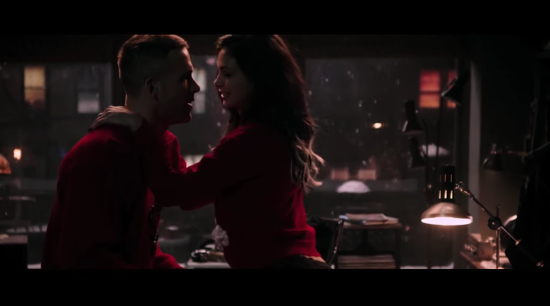 What’s that, you say? In a post bemoaning the “mainstreaming of extreme sexual perversion” exemplified in the movie Deadpool, Christian writer Christopher West writes

… let me forewarn you: In this blog I’m going to talk about a level of sexual perversion you may prefer not to know about. Feel free to opt out if you haven’t the stomach.

That warning out of the way, West explains why it’s important to tackle the comic book menace at all (Short answer: it’s popular and parents need to be able save their kids from such horrors). He also acknowledges that he hasn’t seen the film, but that he’s getting his reports from reviews. (Note: very minor, non-plot-related spoilers ahead.)

He then proceeds to address the shocking perversity of the film.

West’s ideas about gender and sex notwithstanding, the core objection comes to light soon enough… but not before some more scandalized hand-wringing about the degeneracy of modern society. Hand-wringing that’s just too laughable not to share.

There’s nothing new under the sun, of course. It’s not like 21st century human beings are the first to pervert the natural order of the sexual act in this way. But to celebrate it in mainstream entertainment on a worldwide scale… that’s unprecedented.

How did we get here? Well, hasn’t radical feminist culture been claiming for several decades that men and women are interchangeable?…

But, alas, it’s right here that the claim breaks down. The roles of male and female in the sexual act simply cannot be re-versed, only per-versed.

Alright, so radical feminists and unprecedented perversions aside, why does the idea of consenting adults doing things he finds gross really bother him?

Because sex is only for making babies. Duh!

Because of the wholesale embrace of the contraceptive mentality, the modern world has forgotten that the most basic, the most fundamental role of gender is to generate the next generation. The root “gen” — from which we get words like generous, generate, genesis, genetics, genealogy, progeny, gender, and genitals — means to produce or give birth to. A person’s gen-der is based on the manner in which that person is designed to gen-erate new life. But as soon as we embrace an ideology that severs genital activity from generation, it’s only a matter of time before the very notion of “gender” loses all meaning and the fundamental order of things gets totally turned around.

West’s complaints about “unprecedented perversion” and the “role” of women and men are bad enough. But he jumps from “the fundamental order of things” getting “totally turned around” to… death. Somehow.

Just like Big Tobacco after years and years of denial finally had to face the overwhelming mountain of evidence and admit that cigarettes cause cancer, so too will the entertainment industry, the medical establishment, governments, and educational centers (in short, the whole modern edifice) one day be compelled to admit that separating genitals from generation has lead to a de-gendered and, as a result, de-generate world.

Dead-pool… it’s a fitting description of a world that continues to celebrate this de-gendering: it seems we’re sinking in a pool of death.

It does? I’m almost afraid to ask, but… how exactly? Because people engage in “genital activity” without the express goal of becoming parents?

Have you checked our world population lately, Mr. West? We’re a solid few billion away from that, really…

He does, however, leave us with good news: There is hope!

Truth and mercy are the only things that can save us. And the Catholic Church continues to offer both to the whole world. Are we willing to accept her offer?

Well, hallelujah and praise be! There is something to “save us” from the scourge of unsanctioned “genital activity” between consenting adults, fictional or otherwise.