It’s bad enough when school districts allow a passive Bible distribution, letting students to pick up a copy of the Christian holy book, you know, if they want one, no pressure at all. (Bad, because non-Christian groups have to fight tooth and nail for the same sort of access.) 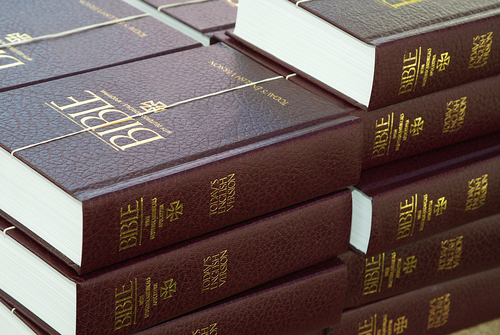 At Piney Chapel Elementary School, a public school in Alabama, a teacher took it much further than that. The Freedom From Religion Foundation’s Sam Grover explained as much in a letter to the District:

We understand that this teacher placed a stack of bibles on her desk and instructed students to take one. The teacher told students that all fifth graders within the school were receiving bibles in this manner…

If all teachers were doing this, then the whole damn school is breaking the law.

This is a teacher preaching in the classroom. It would be a national story if she handed out copies of the Qur’an (or a Satanic coloring book). But because it’s the Bible, and this is Alabama, it takes a group like FFRF to give it the attention it deserves.

No public school should be in the business of indoctrinating students into Christianity. No teacher should be allowed to get away with it, either.

The question now is whether the District will take these allegations seriously.