On Thursday, former Tea Party darling and South Carolina Governor Nikki Haley proudly endorsed Marco Rubio for president. Joined on stage by Representative Trey Gowdy and Senator Tim Scott, she used the multi-colored moment to extol the diversity of the GOP, telling the crowd, “Take of picture of this, because this new group of conservatives taking over America looks like a Benetton commercial.”

In a time when minorities are simultaneously a rising force in the electorate and alienated by GOP policies and rhetoric, it was an important moment. Haley, an Indian American, joined by Scott, a black American, was endorsing Rubio, a Cuban American. Somewhere out there, Reince Priebus was crying tears of joy. This is the image the party wants — no, needs — to portray. 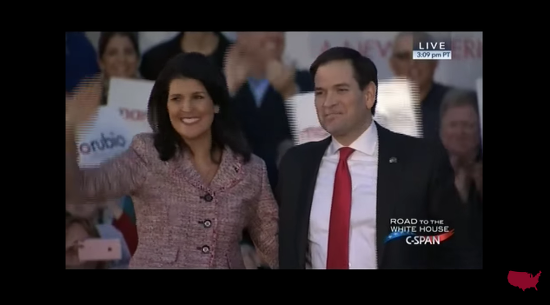 There’s one tiny problem with the optics, though. This diverse collective that Haley says is the future of the Republican Party? The values Rubio wants us to return to would never have allowed it in the first place.

In an ad released in December to counter Cruz’s dominance with the Religious Right, Rubio proclaimed:

This election is about the essence of America. About all of us who feel out of place in our own country. A government incredibly out of touch, and millions with traditional values branded bigots and haters.

If we were to return to a time in history that valued such perspectives, his candidacy would likely be dead in the water. In no such world would Nikki Haley, née Nimrata Randhawa, be on that stage with him. And forget about Tim Scott. And while Haley’s place in history as an Indian American women is far from insubstantial, her tenure illustrates the fact that the “values” Rubio longs for still bleed racist.

In June of last year, a young white man entered a meeting at a predominantly black church and slaughtered nine innocent people in an effort to start a race war. In the fallout, the public cried for the removal of the Confederate Flag — a symbol widely associated with racism — from the state capitol. Haley eventually complied, and the backlash from her Tea Party base was fast and furious, with consequences to this day. As Think Progress reports:

Voters at Trump rallies on Wednesday told ThinkProgress that Haley lost their support when she made the decision last summer to remove the Confederate flag from the state capitol, where it had flown for 54 years. And they said they will never forgive her.

“That’s history,” said Tammi Lawton, who attended Trump’s rally in Walterboro with four friends. “No matter which way you look at it, that is history. That’s Southern history, and she’s a stupid idiot.”

Ridgeland, South Carolina-resident Dianne Lawson said that she voted for Haley in 2014, but wouldn’t do it again.

“She lost her support in South Carolina this past summer,” she said. “I’d always been a supporter of Nikki Haley, but I don’t believe the package that she’s selling anymore. She knuckled under to political pressure and she went too quick and didn’t care what South Carolina residents thought. It was all about what was going to make her look good.”

Realistically, the diversity the GOP wants to project is only accepted with conditions. Bobby Jindal, for instance, was considered a beacon of diversity in an overwhelmingly white crowd. Boasting a skin tone several shades darker than Haley, he was at one point regarded as a rising star in the Republican Party. But his star shone bright because it was whitewashed, and though faces like his might pass for diversity in the GOP, it does little to draw diverse voters into the fold. As the Washington Post explains:

[Jindal] at some point decided to be the leading Muslims-should-be-regarded-with deep-and-codified-suspicion candidate in the 2016 race. And, there were already those stories about the person named Piyush Jindal, son of Hindu immigrants, becoming a Louisiana Catholic named Bobby Jindal who hunts, courts the endorsements the “Duck Dynasty” empire, and proudly displays official and unofficial portraits of himself with bizarrely fair skin.

That may sound, to some people — particularly those who are politically conservative — like the ideal path for the son of immigrants making a life for himself in the United States. Some might describe all of the above as nothing more than unimportant personal choices with little social or political significance.

But to others, many of whom are themselves first- and second-generation Americans, that looks and sounds a lot like something that moves beyond reasonable and practical efforts to assimilate. That’s a journey that ventures into the demeaning territory of imitating a specific version of American, Southern whiteness.

In other words, Haley’s vision of GOP diversity is not without caveat, because the base of the GOP won’t accept real multicultural inclusion. Tethered to the demands of the Religious Right, Republican diversity today is superficial at best. And if Rubio’s vision of returning to a time when their traditional values were lauded is realized, even Haley’s whitewashed version of diversity will be little more than a pipe dream.

February 18, 2016
Why the Pope's Comments on Condoms May Not Change Latin America's Zika Virus Problem
Next Post

February 18, 2016 A Year After an Atheist Author Was Killed, Bangladeshi Police Are Still Arresting the Wrong People
Browse Our Archives
What Are Your Thoughts?leave a comment