Bryan Fischer: Evangelicals Are Supporting Donald Trump Because of Satan

Why does Donald Trump have so much support from evangelicals? Simple. Because they’re taken in by his bravado and arrogance way more than they care about what he thinks when the doors are closed.

But Bryan Fischer is still under the assumption that evangelicals would vote for the most evangelicaliest candidate. So he’s stunned that they’re not going for Ted Cruz (or Mike Huckabee, when he was still in the race).

Don’t worry, though. He has a perfectly reasonable explanation for all this. 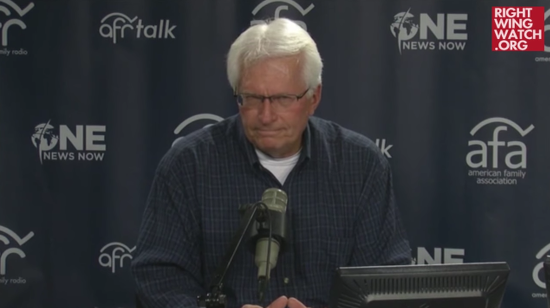 You look at Donald Trump and there is something, to me, that is unnatural about his level of support. Something there that you cannot explain based on the world that we can see, based on natural causes, based on what is rational and logical and understandable. There is something that is beyond the world of nature that’s going on there to prop him up and create this inexplicable obsession that people have with him…

We know that not every spirit that’s out there in the unseen world is a friendly spirit. There are spirits out there that mean us harm, that mean our country harm, and politics, this power, comes from God. Let’s not forget that every bit of political power comes from God. Who is gonna be interested in getting their hands on the levers of God’s power? It’s going to be Satan, he’s going to be all over that, he’s going to try to make sure that the man of his choosing has God’s political power to exercise, and we as believers need to have our eyes open to that possibility…

I rarely say this, but Fischer is thinking too hard.

As much as evangelicals love a candidate who’s anti-abortion and anti-gay marriage, they’ve supported those candidates in the past and it’s gotten them nowhere.

At this point, why not go for the guy who sounds like he knows what he’s doing and maintains confidence in his message, no matter what the evidence says?

It wouldn’t be the first time they’ve fallen for someone like that.

February 18, 2016
Pope Francis on Donald Trump: "A Person Who Thinks Only About Building Walls... Is Not Christian"
Next Post

February 18, 2016 Pope Francis: Contraception "Not an Absolute Evil" in Battle Against Possible Effects of Zika Virus
Browse Our Archives
What Are Your Thoughts?leave a comment