If you’ve heard discussions about the phrase “Happy Holidays” on Fox News, then you know that religious sentiments can be very delicate indeed. Eager to spare the sensibilities of the faithful from unpleasantness, one Georgian lawmaker recently proposed an anti-blasphemy bill. 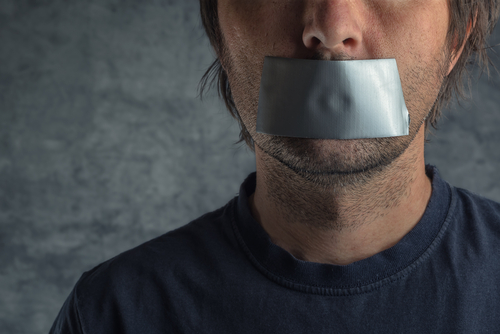 … stated that it aimed to protect all religions, punishing irreverence toward religions by law.

It proposed imposing a fine of 100 lari (around £80) for “insults to religious feelings”, with the figure doubled for a repeat offence. Desecrating a religious symbol could result in a fine of 1,000 lari (£800), about the figure of the average monthly salary.

While the bill was “conditionally approved by the parliament’s human rights committee,” not everyone was thrilled with it. For rather obvious reasons, it raised concerns among the ruling party — not to mention both human rights groups and religious figures:

Criticism of the bill also came from within the Orthodox church. One Georgian Orthodox priest, Deacon Tamaz Lomidze, based in Germany said in a sermon: “Who can define religious feelings? What judge can rule on whether a certain action is insulting to to someone’s religion?”

Amnesty International said it feared that the bill threatened to “outlaw criticism of religious leaders and institutions, and suppress free speech on topical political and social issues.”

The conflict finally prompted Jachvliani to withdraw the bill on Monday, “saying it needed more work.” It is, obviously, good news that Georgia has decided to hold off on punishing people for the non-crime of blasphemy.

It will be even better news if they abandon such a silly scheme permanently, as the issue with the bill isn’t that it needs more work, but that it doesn’t even solve a real problem. It’s absurd to criminalize speech like blasphemy. After all, all powerful gods should be able to stand up to a little questioning or ridicule on their own.

February 18, 2016
Pope Francis: Contraception "Not an Absolute Evil" in Battle Against Possible Effects of Zika Virus
Next Post