A Year After an Atheist Author Was Killed, Bangladeshi Police Are Still Arresting the Wrong People February 18, 2016 Hemant Mehta

A Year After an Atheist Author Was Killed, Bangladeshi Police Are Still Arresting the Wrong People

It was nearly a year ago that atheist author Avijit Roy was attacked and killed by Islamic extremists while leaving a Bangladeshi book fair. 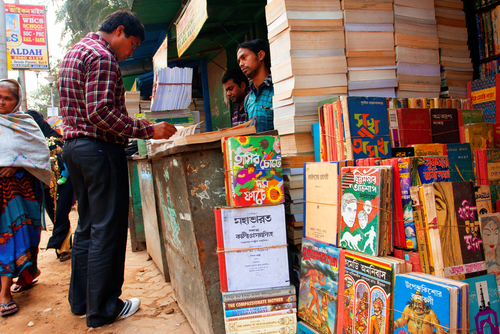 Well, nobody is selling Roy’s books this year.

And one of the stalls has been shut down because owners were selling a book that questioned Islam, thereby offending “religious sentiments.”

Police yesterday shut down yet another stall at the Amar Ekushey Boi Mela for selling a book with content that could hurt “religious sentiments” and detained three people in this connection.

In a raid, conducted around 4pm, led by Shahbagh police station officer-in-charge (OC) Abu Bakar Siddique, the stall of Badwip Prakashan, located at the Suhrawardy Udyan part of the fair, was shut down.

They also seized copies of several books including Islam Bitorko (the Islam debate), which is a collection of essays compiled by Shamsuzzoha Manik, also owner of the publishing house.

Those three people were later arrested.

In short, police in Bangladesh are taking special precautions this year… by going after people who are critiquing religion, not the Muslim terrorists who might get so offended by their words that they resort to violence.