When People Change Religions, Logic and Reason Aren’t Always in the Picture

In a brief but fascinating interview with Staks Rosch at Publishers Weekly, author Susan Jacoby talks about her new book Strange Gods: A Secular History of Conversion: 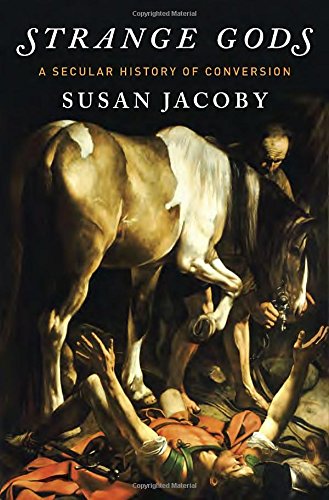 She explained why people change their faith — and wouldn’t you know it, logic and reason aren’t always the primary reasons.

People generally think about conversion only in terms of a spiritual journey, when in fact, there are a lot of secular factors involved. Sometimes it is simply that the political winds have shifted. Another factor is discrimination against minorities. That was a huge factor in my father’s family because of anti-Semitism — people perceived being a Jew as a disadvantage. Also, the history of conversion is rife with people who adopt religion or another religion because they think it will help them overcome a personal failing or some compulsion like alcoholism, and in many cases, it does. But the most powerful secular factor promoting religious conversion is religious inter-marriage.

That never made sense to me. I get the practical reasons for it (to appease your partner’s parents, for example), but I never understood how some people could genuinely just drop whatever their current beliefs are and magically adopt a new religion.

If they’re willing to change their faith at the drop of a hat, it suggests that even they don’t take religion very seriously.

February 18, 2016 In Remembrance of @TheTweetofGod
Browse Our Archives
What Are Your Thoughts?leave a comment