Ted Cruz’s Dad Says America Will Be Destroyed Within 30 Years if Obama Gets His Supreme Court Pick February 17, 2016 Hemant Mehta

What happens when Pat Robertson and Ted Cruz‘s dad get together?

Sadly, they don’t cancel each other out.

Rafael Cruz said on The 700 Club yesterday that if President Obama‘s nominee to the Supreme Court gets through, America as we know it will be over within 30 years: 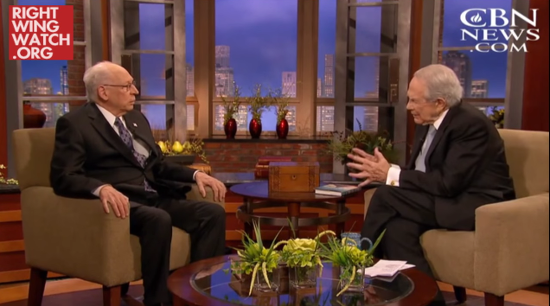 Right Wing Watch has the story:

“President Obama is trying to use every time he can to disarm America,” he said.

However, Cruz said that he is hopeful about the future of America because of the Supreme Court’s “decision against traditional marriage,” telling Robertson that “the Devil overplayed his hand” with the ruling and has motivated conservative Christians to get involved in politics. “We must return to the Judeo-Christian, the biblical, the constitutional foundations that this country was built upon,” he said, “otherwise this country will be destroyed.”

The elder Cruz then went on to say that Justice Antonin Scalia’s death could usher in America’s destruction: “This could tilt the balance of the court and could be something that would affect America for the next 30 years. We don’t have 30 years.”

He went on to falsely claim that “no nominee for the Supreme Court has been confirmed in the last year of the election” in over 80 years. (In fact, the last time that happened was in 1988 when Justice Anthony Kennedy was confirmed.) “The balance of the court cannot be tilted in a lame duck year, it’s just not done.”

Lying for political purposes must run in the Cruz family.

February 17, 2016 Radio Host Rick Wiles: Justice Scalia's Death was a Pagan Sacrifice By President Obama
Browse Our Archives
What Are Your Thoughts?leave a comment