Political Religious Pandering: The Difference Between Democrats and Republicans

When it comes to religious pandering in the U.S., Republicans are easy targets. They objectively advance legislation and rhetoric that conflate church and state in obvious (and wholly inappropriate) ways on a far more frequent basis than Democrats. But when all is said and done, Democrats can and do play the same game. So why do Democrats seem to get a free pass? The Devil, as they say, is in the details. 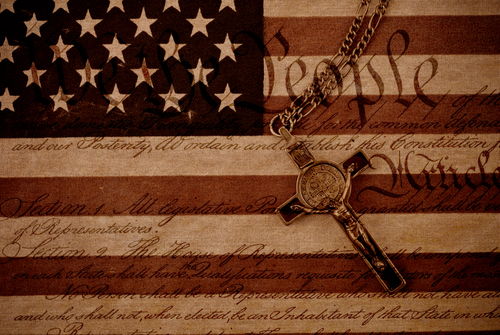 For Republicans, religion stands front and center in their campaigns, and this year really drives that point home.

The Republican battle for the presidential nomination has been soaked in more than a few invocations of Christ’s blood. Though several of the most religious candidates — including Rick Santorum and Mike Huckabee — have dropped out from the race, Senator Ted Cruz and Ben Carson have built their brands around religious fundamentalism, and Marco Rubio isn’t too far behind. For these candidates, religion is wielded as a weapon — a justification for exclusionary politics based on gender, sexual orientation, and more. It shapes both their rhetoric and policy proposals.

For the Democrats, religious pandering has less to do with dogma and exclusion and a lot more to do with compassion and its role in policy and politics.

This past weekend offered a good example of this. Both Clinton and Sanders found themselves in the pews at a Victory Missionary Baptist Church service in Las Vegas on Sunday. Clinton arrived with and was introduced by Civil Rights hero Representative John Lewis before delivering a message about defending the Affordable Care Act, a policy which she framed as “especially important for African-Americans.” Sanders spoke to the need for criminal justice reform and accountability in law enforcement. Both speeches were largely secular in nature, with references to faith made in a ubiquitous manner that supported the policy topics they were tackling. That they were giving these speeches was more a function of optics than substance.

Though their tactical integration of religion varies dramatically, both parties, despite a growing atheist population in America, still find themselves in a position where they need to appeal to the religious in some way, shape, or form. For Republicans, such posturing and policies are an affirmative attempt to woo the white Religious Right, particularly in the South. For Democrats, it’s more complicated than that.

As the Nevada example illustrates, part of it has to do with appealing to minorities, who have long made up a substantial portion of the Democratic base. This is particularly true of black voters. In fact, in no election since 1936 has a Republican candidate been able to carry more than 40% of the black vote. This trend became even more pronounced after 1948, when President Truman began showing support for civil rights. After the passage of the Civil Rights Act, the chasm between the two parties was essentially insurmountable. Today, only 2% of Republicans are black.

When it comes to primaries, grabbing the lion’s share of the black vote can be a significant factor in whether a candidate succeeds or not, and securing that vote often requires what we see as religious posturing. Pew Research Center data indicates that 85% of black adults believe in God with absolute certainty, with 75% saying religion is a very important part of their lives, 73% reporting that they pray daily, and 47% attending church weekly. But the pandering from the left to black religious voters probably has less to do with appealing to their Christian beliefs than it does getting the support of community leaders.

Historically speaking, the church has played a central role in black communities, serving not just as a place to worship, but a place to organize politically. This is why you’ll see Democrats seeking out religious endorsements from primarily black congregation leaders. These pastors and preachers can significantly influence the perception of a candidate among their followers. This is why you saw Clinton and Sanders at Victory Mission Baptist Church. It’s part of why you’ll likely see them visiting more than a few churches in the days and weeks to come — not only as a play for the heavily black Democratic base in South Carolina, but in preparation for the Southern states ahead that share the state’s demographics.

But by and large, the primary reason you’ll see tepid religious outreach from Democrats has less to do with winning over the religious than it does to do with playing defense for the coming general election. It’s one thing for the GOP to slam them as being “godless” because of their policies. It’s another thing entirely for them to slam the Democratic for being godless altogether.

Though the electorate’s attitudes about atheist candidates are moving in the right direction, we’re not quite at a point where an out atheist could take the White House. Not only would an embrace of atheism likely alienate the black vote, but it could cost a party the Hispanic and Latino votes as well, where 57% of the population is Catholic.

So, yes, it may feel a little uncomfortable to watch the candidate you’re depending on to be an advocate for separation of church and state pandering to those inside the Church, but a closer look at the differences between Republicans and Democrats when it comes to tactics and purpose hopefully provides some comfort.