One Out of Eight Ain’t Bad… It’s Terrible 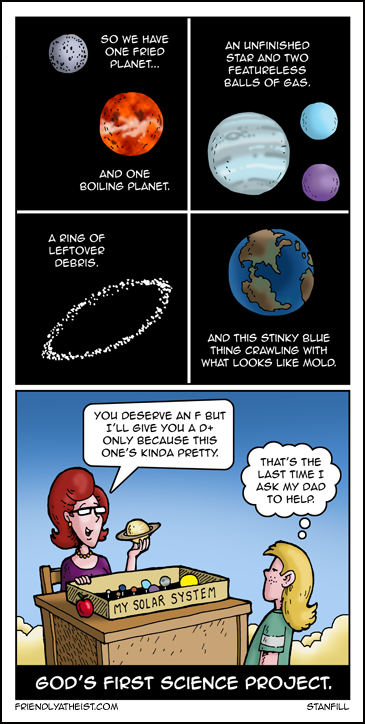 From a mythological standpoint I can understand (Hint: marketing) how God might have created Earth specifically as the unique cradle of life for the whole universe but why did he go to such extremes with the other planets in our solar system? Why weren’t they simply seven more cookie-cutter-Earths minus the RNA? Why gas giants and airless rocks and asteroid belts and literal fiery Hells? (Right about now Venus’ ears would be burning if they weren’t already literally burning. If it had ears, which it doesn’t, so never mind.)

Speaking of the asteroid belt, thanks, God, for that simply aDORable ring of potential civilization-killers circling old Sol. It’s almost like burying Claymore mines outside the local nursery. I’m pretty certain He thought that Mars and Jupiter would be better neighbors, leaving the potential new planet alone but noooOOOOOoo, they had to start throwing their gravitational leaves on each other’s lawns. It’s conceivable that His intent was to employ it as a future navigational gauntlet against human probing of the outer reaches of the solar system. If so, it’s Science: A Whole Bunch, God: Zero-Zip-Nada. At least so far.

The wild diversity in planet geology offers an indication that God possibly approached the whole concept of planet-building with the eye of an artist but the least He could have done was leave better clues to his handiwork, like a signature on the back side of the Moon or a smiley face on Europa or a big heart on the surface of Pluto…

February 17, 2016 Political Religious Pandering: The Difference Between Democrats and Republicans
Browse Our Archives
What Are Your Thoughts?leave a comment