If you enjoy superhero movies, you might have caught a showing of the new Deadpool film this past weekend. Christian movie reviewers certainly did. (If you haven’t seen it yet, no worries — there are no spoilers ahead that the rating doesn’t give away.)

The Merc with a Mouth may already be setting box office records, but many religious reviewers are hoping those tickets aren’t being bought by their audiences.

Which is confusing. Since they said the movie was “humorous,” enjoyable, “very well done,” etc. But (*gasp*) there’s nudity and naughty language! 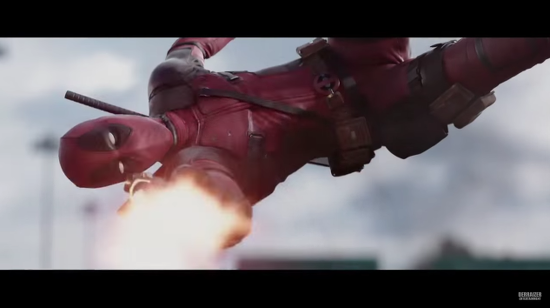 In one of the more measured opinions on the topic, Martin Saunders, writing for Christianity Today, wonders what has become of the church — and himself — that a movie like Deadpool does not elicit more outrage:

I laughed at many of the jokes; I found myself caught up in the story — especially in the romantic plot. I wouldn’t seek to justify that, but it does cause me to question: what’s happened in the church, and more specifically within me, that means I no longer react with shock to those things which prove the very antithesis of Paul’s Phillippians 4 list?

Make your own mind up about that, and whether you should see a film that’s quite so Godless (and there’s no sneaky secret redemptive subplot to use as a Get Out of Jail Free card I’m afraid).

But the godlessness of Deadpool is by no means the worst complaint Christian reviewers have to offer.

MovieGuide — a site that aims to review “all movies from a Christian perspective” — is decidedly not impressed. In an entreaty called “Dear America: please don’t watch Deadpool!” reviewer Ben Kayser warns:

Foul mouthed, sexually perverse, gratuitously violent and immoral by its own admission, DEADPOOL earns its R-rating.

It’s not just the “debauched vulgarity” of the film, though, that Kayser worries about. He also complains that the anti-hero theme is destructive. And he somehow ties this to free speech:

The mocking of fictional heroes in DEADPOOL doesn’t just mock Captain America or Iron Man, it mocks the very ideal of heroism and the real life heroes that make this type of free speech possible. DEADPOOL is the lawless fantasy of our sinful nature, and right now, too many people are celebrating it. DEADPOOL’s arrogant and rebellious attitude may have a level of attraction, but that’s why it’s important to fight against it. We need less arrogance and more humility. Less perversion and more purity. Less rebelliousness and more honor.

But the complaints don’t stop at lawless fantasy and free speech concerns (still trying to wrap my head around that one…). Geeks Under Grace worries about the nudity and the “pornographic relapse” it might cause in viewers:

I cannot for any good reason recommend anyone go to see this movie. Knowing my own struggles and convictions, seeing this film would have triggered some sort of pornographic relapse had I seen it nine months ago. Thankfully, I have a wife who I am accountable to, and she was integral in me assuring I averted my eyes from the nude scenes in the movie. As John Piper has said, you can’t fake nudity. Violence can be faked (no one actually dies), but the women in the movie are real women and are really naked. For someone who struggles with pornography and cannot abstain from it, this movie is not going to be therapeutic for you.

While MovieGuide’s concerns were fairly amusing to read, this one is just kind of sad. Averting eyes from TV nudity was actually a rule in my family’s house when I was a kid — if my parents had prescreened the film, they would skip the “fast forward parts”… and if not, it was understood that we would close our eyes and look away. But adults, so guilt-racked that nudity is still this upsetting, that spouses have to enforce viewing restrictions during a movie? That’s depressing. (And, if nothing else, it’s a good reminder that the impact of “purity culture” reaches not just women and girls but men as well.)

As for John Piper, whose comments on Deadpool are referenced by Geeks Under Grace, the Desiring God website has seven questions from him to answer “before you watch Deadpool.”

Jesus said everyone who looks at a woman with lustful intent has already committed adultery with her in his heart. If your right eye causes you to sin, tear it out and throw it away (Matthew 5:28–29). Seeing naked women on the screen — or naked men — causes a man, or woman, to sin with their minds and their desires, and often with their bodies. If Jesus told us to guard our hearts by gouging out our eyes to prevent lust, how much more would he say, “Don’t watch it!”

3. Do I Care About the Souls of the Nudes?

God calls women to adorn themselves in respectable apparel with modesty and self-control (1 Timothy 2:9). When we pursue or receive or embrace nudity in our entertainment, we are implicitly endorsing the sin of the women who sell themselves to this way and are, therefore, uncaring about their souls. They disobey 1 Timothy 2:9, and if we watch, we say that’s okay.

I guess God doesn’t mind when Ryan Reynolds takes his clothes off, just when his female co-stars do it. At any rate, this “defilement” of the viewers’ thoughts has deep spiritual implications to Piper:

The defilement of the mind and heart by watching nudity dulls the heart’s ability to see and enjoy God. I dare anyone to watch nudity and turn straight to God and give him thanks and enjoy him more because of what you just experienced.

After a lengthy explanation about how dangerous nudity and lust can be, Piper ends on the following note:

So I say it again: Join me in the pursuit of the kind of purity that sees God, and knows the fullness of joy in his presence, and the everlasting pleasure at his right hand.

These articles have met with varied success, some being shared thousands of times, but something tells me that they’re not likely to dissuade too many viewers in the long run. After all, a narrative of “it was funny and compelling, but don’t see it” is a very tough sell.